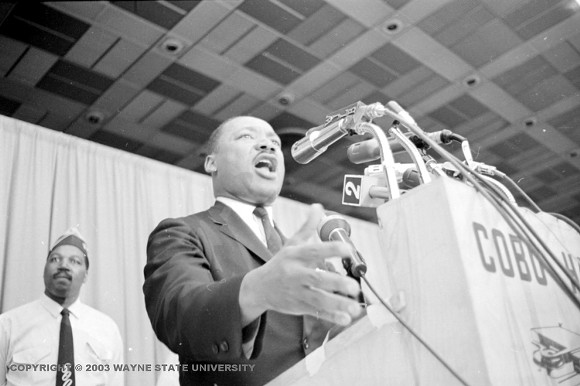 In June 1963, a crowd of 125,000 took to the streets of Detroit in the Walk to Freedom march that eventually concluded at Cobo Hall. While at Cobo, Dr. Martin Luther King Jr. delivered a rousing 30-minute speech — an early take on what would become his famous "I Have A Dream" speech in Washington D.C. for the March on Civil Rights weeks later.

Remembering Dr. King @cobocenter where he first delivered his "I Have A Dream" speech to thousands in #Detroit: pic.twitter.com/8JiQxoAseD

Being that it's Martin Luther King, Jr. Day, here's a copy of the speech he gave in Cobo (via WDET's Detroit Today). The entire text of his speech is available here, and check out photos from the Detroit march here.