How Detroit ceased to exist 206 years ago 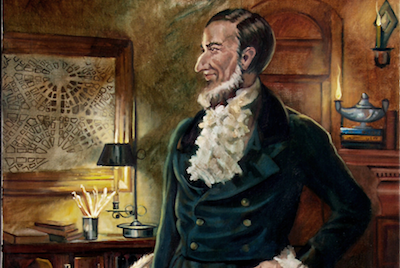 Strange but true: On the morning of Feb. 24, 1809, dawn came to the city of Detroit, but that city did not technically exist when the sun set that evening.

Don’t get us wrong: The houses, inhabitants, and fortifications remained. But the legal entity known as the “City of Detroit,” which had been established by an act of Michigan Territory on Sept. 13, 1806, was repealed that day. The city reverted to its original legal status as a “town,” and would retain that legal identity for another six years, until a new city charter was granted by the territorial government on Oct. 24, 1815.

Why did all this happen? It’s actually a long and engrossing story that begins with the city burning to the ground in 1805. In the wake of that catastrophe, the young territory’s chief judge, Augustus B. Woodward (pictured above), developed a fanciful plan for the future metropolis — and came into conflict with pretty much everyone else, including the powerful military governor. In the legal jockeying, the repeal of Detroit’s status as “city” was actually a political move designed to frustrate Woodward’s designs.

But the maneuver also illustrates a point made by many backers of Michigan’s sweeping Emergency Manager Law: that cities are creations of the state (or, in 1809’s case, the territory), and may be tinkered with, ruled, chartered, and even abolished from above.

Of course, the differences between Detroit then and the Detroit under Kevyn Orr are very, very stark. The population of Detroit of that time was 1,650, and it was a frontier outpost that wouldn’t even have a carriage rolling down its streets for another six years. It would be difficult to find a comparable community in our state today, as most municipalities in Michigan of that size are townships and villages, not cities. In that sense, comparing Detroit of then and today is pretty much impossible.

But maybe some comparisons will seem more apt. From the distance of 209 years, today’s scholars agree the crux of the matter wasn’t whether Detroit was a city so much it was which competing vision of the city’s future development would prevail.

Who knows if the sages of the year 2215 will render a similar verdict on our more recent events?