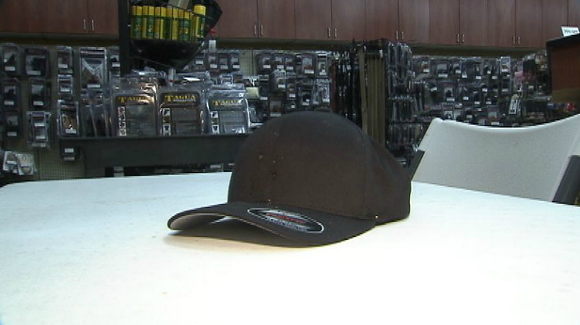 BulletSafe, a Troy-based manufacturer that produces safety gear for security personnel and the general public, plans to add a new item to their line of products: Bulletproof baseball caps.

The cap is equipped with a five-ounce panel that covers the forehead and, in theory, can deflect a bullet.

The BulletSafe crew put it to the test recently on some produce at Action Impact gun range in Southfield.

My Fox Detroit has the details:

"We'll be using a Glock 17 which is a 9 millimeter," [Firearms instructor Neil] Emanuel said.

Neil fires a round into the cap covering the cabbage. The cardboard pedestal collapses, but look again. You can actually see the bullet round bouncing off the cap. The bulletproof cap works as the round rebounds off the cap. Although it would ring your bell.

After the cabbage, the question is will the cap save your melon. The cap goes on a cantaloupe and another round is fired.The ball cap stops the round again. And here it is, a mushroomed 9 mm round stopped by the cap.

However, as far as the energy delivered to the melon, although the bullet did not penetrate it's going to leave a mark.


The verdict? Wearers would probably get a concussion, but would walk away with their life.

The cap's not on the market yet, but folks can expect it to retail for $129.