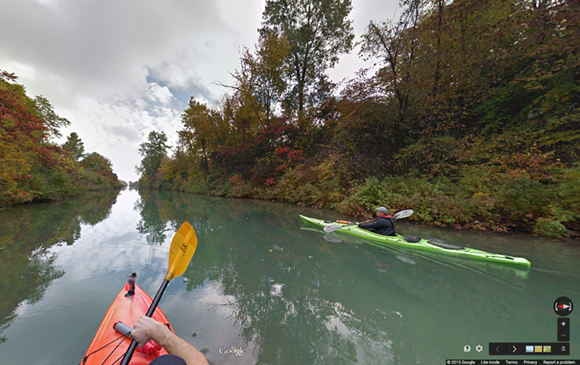 Michigan residents can now enjoy their favorite sites and attractions from across the state in the confines of their home, thanks to a partnership between Pure Michigan and Google announced Monday.

The state of Michigan will be the first in the Midwest to use Google's Street View Trekker technology, introduced in 2012 to create 360 degree panorama shots everyone commonly sees on Google Maps.

More than 44,000 images, unveiled today at the 2015 Pure Michigan Governor's Conference on Tourism in Grand Rapids, were taken over the course of four weeks. Now, images from the top of the Mackinac Bridge, Sleeping Bear Dunes National Lakeshore, the Detroit Riverwalk, and more, are available to the public in fully-navigable shots.

“The Pure Michigan campaign has elevated Michigan as a national travel destination, and we are taking that one step further by having these images globally accessible on Google Maps,” said Lt. Governor Brian Calley, in a statement Monday. “This initiative combines our natural beauty with innovative technology in a way that really speaks to all that Michigan has to offer visitors, residents and businesses alike.”

Google introduced the Trekker technology in 2012. It's structured as a backpack system with a camera on top that an operator wears while walking through sites. Images are captured automatically to create the panoramic shots. The Internet giant has used Trekker to capture the Grand Canyon, the Taj Mahal, and the Galapagos Islands. Not bad company.

“This technology is an excellent way to introduce people to Michigan’s outstanding natural and cultural resources,” said Department of Natural Resources Director Keith Creagh, in a statement. “Showcasing these exceptional places through Google Trekker will allow people everywhere to see what residents of our state already know: the beauty and wonder of Michigan rivals any place on earth.”

The state says the new images, now available via Google Street View, include:
Check out the images at www.michigan.org/googletrekker.