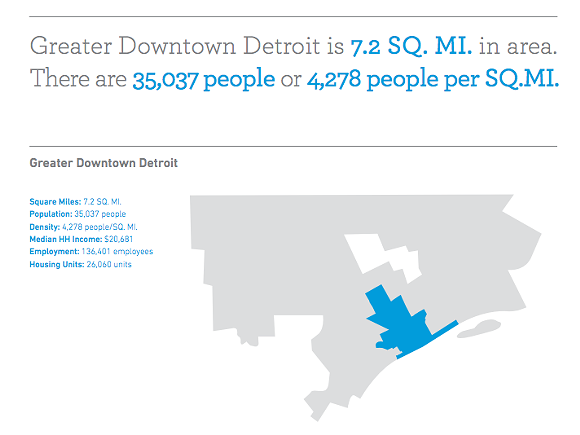 An updated edition of the Hudson Webber Foundation's much-lauded "7.2 SQ MI" report on Greater Downtown Detroit was released this week, showing an in-depth analysis of an area that has seen an influx of new businesses and restaurants — but also a slight dip in population.

The name "Greater Downtown Detroit" leaves much open to interpretation (what about the Central Business District?), but for some context, the foundation zeroes-in on these areas of Detroit: downtown, Midtown, Woodbridge, Eastern Market, Lafayette Park, Rivertown, and Corktown.

There's certainly some noteworthy points contained within the report: For example, the total number of people who live in this defined area has dropped from 36,550 to 35,037, a 4.2 percent drop. About half of that total figure can be attributed to Midtown, with 18,388 residents, according to the report.

But, as Crain's Amy Haimerl notes, while the drop may catch some by surprise, it's a more accurate representation of present-day Detroit: The inaugural 2013 report was based off of 2010 U.S. Census figures; the new report takes recent estimates from the 2012 Census' American Community Survey. (The total population presented in the report for the entire city of Detroit is over 720,000 — which, as we've learned, has since plunged to around 680,000.)

And while the bustling downtown region garners ample attention for being an up-and-coming place that attracts millenials, plenty of kids still call it home: 4,764 people under the age of 18 live in the 7.2.

The report takes pains to offer insight into rather obscure data points, such as how many restaurants in Greater Downtown have a patio (81), how many cyclists pass "key blocks" in Midtown and downtown per hour (80), and how many people between 25-34-years-old have a bachelor's degree (2,748).

What's the upshot? Depends. Much has been made about ensuring a diverse crowd has access to opportunities in Greater Downtown, but it would appear in the report this swath of Detroit maintains a healthy, diverse population. If anything, it's an opportunity for data wonks to nerd out and dissect six ways to next Sunday. Enjoy.

Check out the full report below.