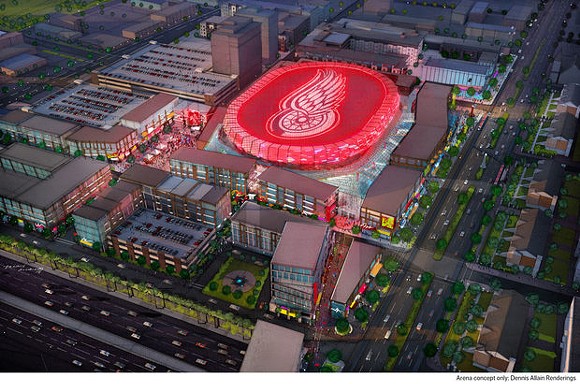 Detroit City Council could vote as early as next week on a proposed rezoning request to facilitate the construction of a new Detroit Red Wings arena in downtown, according to the Detroit Free Press. A council subcommittee approved the request, which includes plans to tear down the historic Hotel Park Avenue, as well as construct an 1,100-space parking garage and public park.

In what appears to be a nod to the purported reputation of Red Wings owner Mike Ilitch as a real estate owner in downtown Detroit, the Freep reports Councilman Scott Benson offered a condition to the request that says plans by the team owner to renovate the adjacent Eddystone Hotel must be submitted to the city before the Hotel Park Avenue could meet a wrecking ball. From the Freep:

The new language theoretically would prevent Olympia from getting a permit for demolition without formally submitting a plan to renovate the Eddystone.

There are additional hurdles Olympia likely must clear before it can tear down the Park Avenue, including permission from the Detroit Historic District Commission.

About 58 percent of the arena's $450 million construction costs will be covered by public funds.