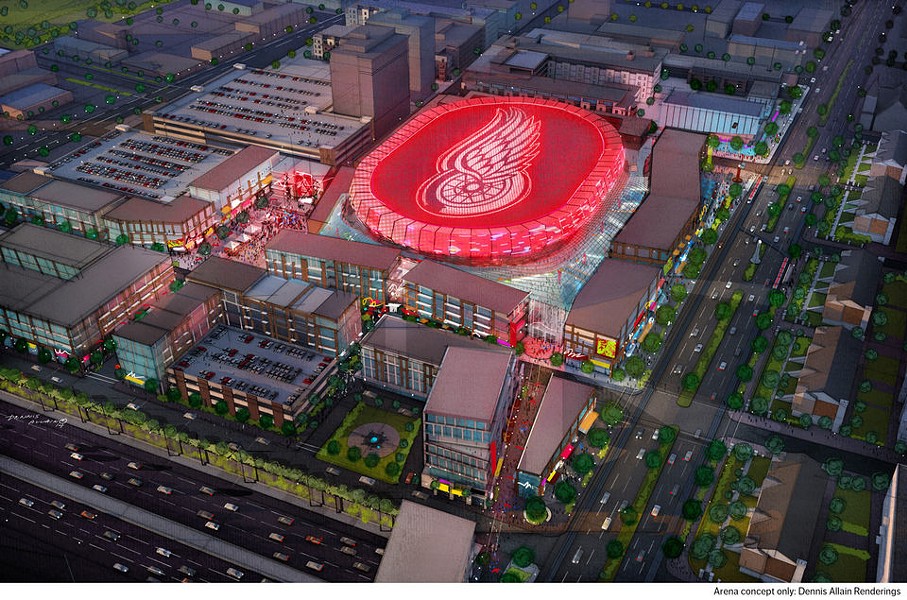 Detroit City Council on Monday voted again to delay a proposed rezoning request to facilitate the construction of a new arena for the Detroit Red Wings until next week.

Based on the response of parties involved — namely, Olympia Development of Michigan, the real estate arm of Red Wings owner Ilitch Holdings Inc. — this is problematic. For instance, a representative of Olympia told councilmembers Monday, the company has already booked events for 2018. Quelle horreur!

Some background: Last November, Olympia requested a delay on the rezoning request to address issues raised by some councilmembers. In particular, the council wanted to know what would come of two historic hotels located in the arena's footprint — the vacant Eddystone and Harbor Light buildings — as well as how parking would be handled.

Olympia made some changes and, last month, came before council with a revamped plan.

Since then, it's been — at least in the public limelight — a tense period. And the reasons boils down to this: Under the current plan, the Harbor Light building (or Park Avenue Hotel), would be demolished, while the Eddystone would be converted into residential apartments — of which a certain percentage would be designated at affordable rates.

But here's the thing. Councilmembers would like a binding agreement on the renovation plans for the Eddystone. As it's currently proposed, it's not etched into stone.

That brings us to Monday's meeting.

Instead of signing off on the proposal, the council asked its law department to produce a resolution for the rezoning request that contains stronger language on the plan for the Eddystone. It would like the Ilitch organization, which doesn't have a reputation in the city as an entity with preservation in mind, to be firmly committed to redeveloping the building. Such reworked language would call for Olympia to garner approval from the city's Historic District Commission on the Eddystone before arena construction can began.

For Olympia, that's an issue.

"I think you jeopardize the [opening] date by going this route," said John Graves, an Olympia consultant who spoke to the council Monday.

Doubling down on his obvious annoyance at this conversation, George Cushingberry, city council president pro-tem, muttered aloud about the apparent quagmire: "Well, they've given us their word."

Sure, they have. But that doesn't necessitate the brouhaha that has since bubbled to the surface over this vote. It's certain that city council will approve this request; there hasn't been any indication otherwise. If some members would prefer to take their time to ensure a redevelopment plan for new residential units is solid, it is not, contrary to insinuations by the company and some officials like Cushingberry, going to jeopardize anything.

First, to point something out: It's unclear how it would be the council's problem that Olympia went ahead and booked an NCAA tourney for 2018. The revamped lease for Joe Louis Arena for Olympia that was approved last year by city council expires in June 2015 — and then calls for an additional five one-year extensions, if needed. Under those terms, the Wings can continue playing at the Joe until 2020.

Next, Detroit councilmembers have been playing catch-up ever since this project was announced in December 2012. At that time, the state Legislature green-lighted the use of public funds to support the construction of the arena; estimates show 58 percent of the costs will be covered by the public.

From that point forward, the ball simply rolled down the hill. After negotiations were hashed out with the Detroit Downtown Development Authority — a separate, quasi-public entity that will own the arena and lease it to Olympia free-of-charge — things moved into city council's court.

(Under the agreement with Olympia, the city of Detroit won't receive any revenue generated from the arena, but no general fund dollars will be used to bankroll construction. Olympia will lease the arena for 35 years, with 12 five-year options. The city will receive about $15 million in income tax revenue from construction jobs and 400 new jobs at the arena, over the course of 30 years — about $500,000 annually.)

Except by the time it reached council, it was made clear things had to keep moving. For example, the proposal to lease the Joe to Olympia, and then subsequently have it demolished once the team moved to the new facility, was presented to council on the last day before an agreement for the project expired. That's what makes Olympia's need to insist an opening date of 2017 could be "jeopardized" all the more puzzling. Even if it was, the company signed off on another agreement that ensured the Red Wings would have a home during the hypothetical delay. But really, though: It's not as if this project was ever going to be rejected — or delayed.

Negotiations over the $450 million arena have lasted two-and-a-half years, but, impressively, it's been seemingly portrayed as a done deal since the Legislature casted its affirmative vote back in December 2012. Now, some councilmembers have simply taken a precautionary step to ensure one of the two at-risk historic structures in the arena's footprint would actually be preserved. That's just fine.