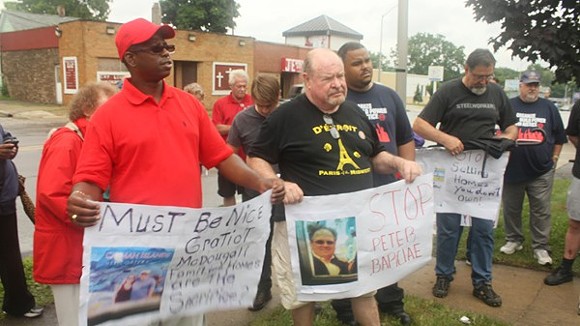 A Wayne County Circuit Court judge earlier this month dismissed a case brought by a group of Detroit residents against an Oakland County Developer, seeking to obtain ownership of their homes near Detroit's Eastern Market.

The decision potentially jeopardizes the Detroit residents chance of keeping their homes.

The case, filed last year by 13 families against Peter Barclae, turned on whether Judge Leslie Kim Smith believed they were contractually linked to the deeds of their homes, or if the developer could legally evict them.

The residents, all of whom moved into the homes around 2008, contended Barclae should've sold the properties to them years ago, as stated in their agreements; Barclae asserted otherwise, saying the residents didn't uphold their end of the deal.

"Ultimately, my client prevailed," Dyer told MT. "I think it was completely appropriate ... she followed the law."

Dyer said his client has "lost a ton of money" on the homes, known as the Gratiot McDougall development.

"He simply is looking to sell the properties," he said. "In fact, we made an offer to these plaintiffs ... we told them, 'We're willing to sell [the homes] to you, you just have to come up with the money.'"

Steve Babson, a longtime activist who's a stalwart in the Detroit Eviction Coalition — which has diligently protested in support of keeping the families in their homes — confirmed Barclae recently made an offer to the families.

"It's my understanding that they're pretty far apart at this point on what is a reasonable price," he said.

But while Barclae has made an offer, the families have been presented with a conflicting series of events: Notices of eviction by the 36th District Court, which were put on hold while the case against Barclae proceeded, have been posted again. A hearing is scheduled Monday morning at the court.

The case remains pending, as a motion has been filed in Judge Smith's court for reconsideration on her decision to dismiss the case.

Vanessa Fluker, attorney for the families, said an appeal will be filed if the motion for reconsideration is denied.

"I just believe that the residents have viable claims ... and I am hopeful that we'll be able to resolve with some type of purchase from Gratiot McDougall homes that will be amicable and fair to all the parties," she told MT.

LACK OF FUNDS
As MT reported last year, the story that led the families to file suit against Barclae is convoluted.

Court records show what appears to have led Barclae’s tenants to sue him was a collapse in the funding his project depended on, with almost half of the federal money he anticipated never materializing due to program requirements not being met by the city of Detroit.

Barclae previously attempted to evict the residents several times, contending they were renters not entitled to purchase the home. In their complaint, the families say they were never led to believe otherwise; no matter what financial concerns plagued Barclae, they were entitled to those homes.

Resident Antoinette Talley previously told MT the residents were sold on a homeownership program, not to occupy the Gratiot McDougall homes as renters. And, she said, each resident spent time essentially designing the homes — from the carpet to the aluminum siding.

"You don't do that for renters," she said, adding, "These homes were custom built for us. These are not just our homes, there are our babies."

Barclae, of West Bloomfield Township, established Gratiot McDougall Homes LLC in 2006. The proposed housing development was to be built with some federal aid under the U.S. Department of Housing and Urban Development’s HOME Investment Partnership Program.

According to HUD, the HOME program “provides formula grants to states and localities that communities use — often in partnership with local nonprofit groups — to fund a wide range of activities including building, buying, and/or rehabilitating affordable housing for rent or homeownership or providing direct rental assistance to low-income people.”

The funds can be awarded as a grant, direct loan, or loan agreement, HUD says. Barclae sought additional financing for the project through Charter One Bank, and developed the homes for roughly $180,000 each, according to his attorney, Allen Dyer. (Using those numbers, the total investment to construct the homes was roughly $3.6 million.)

Barclae guaranteed about 58 percent of the loan from Charter One, the HUD HOME program would cover the rest, according to Dyer.

Things were looking up for the developer, as in 2006, Gratiot McDougall was awarded a $319,000 tax credit by the Michigan Economic Development Corporation. The city of Detroit was set to administer $1.4 million in HOME funds for the project under the terms of a December 2006 agreement with Barclae, “to construct 18 single-family homes for purposes of resale to qualified Home Buyers.”

For prospective first-time buyers, it seemed like a ripe opportunity: The homes were marketed in April of 2008, highlighting that some tenants may be eligible for upwards of $60,000 in down-payment assistance. It was cast as a homeownership program, a point re-emphasized in a 2008 letter to one tenant.

“This housing program is a homeownership program,” Barclae wrote in the letter dated July 15 of that year. “If you do not provide requested documents in order to obtain your mortgage on a timely basis or any actions on your part that adversely affect your credit score are grounds for terminating the lease.”

The funding from HUD hinged on Barclae’s tenants eventually obtaining a mortgage, Dyer previously told MT. That’s because “the mortgages the tenants were supposed to get were to pay off the Charter One loan with the tenants ultimately becoming the owners of each property,” he said. Five of the properties were eventually closed on.

Barclae broke ground in the fall of 2008, and the homes were ready to be occupied the following year.

Except, by then the housing market was already in a downward spiral. That raised the prospect of financial calamity for Barclae.

Attorneys representing Barclae-affiliated firms wrote in a court filing: “Unfortunately, due to the city’s glacial bureaucracy, as well as the economic hardships felt throughout the country … very few of the purchasers were able to qualify for mortgages by the time the homes were complete.”

Most, but not all of the residents, also signed an additional purchase agreement as well, requiring them to obtain a mortgage to complete a purchase of the home, he says.

“The purchase agreements typically required the buyers to obtain a mortgage in 90 days, but some had terms of up to a year,” he said.

Dyer said the prospective buyers moved in under what was “essentially … a lease option to purchase” agreement, with rent payments on average between $750 and $850, “as a temporary measure.”

In addition, he said, “the lease also included language stating the buyers were to obtain a mortgage and in the meantime they were to pay rent on a timely basis.”

Dyer said the rent was never meant to be applied to a purchase price because it “just barely covered insurance, taxes, and debt service.”

Barclae, he said, “wanted to encourage the tenants to obtain their mortgage, so they could buy the homes and discourage them from being long-term renters." The residents who filed suit didn't obtain a mortgage and owed nearly $200,000 of back rent, he said.

Attorney Fluker suggested in the complaint that Barclae may be the reason for that.

According to court filings, the families were told “that they were approved for residential mortgages and that they ‘would be closing at any time.’”

It’s unclear where that indication from the company stems from. A 2009 lawsuit between Charter One and two Barclae-affiliated companies, Cynba International and Community Planning Association — who appear to be named as the recipients of the $1.4 million in financing for the housing project — cites such a scenario involving the banking institution.

According to an unpublished opinion from a three-judge state Court of Appeals panel, Charter One sued to recoup the outstanding balance of its loan with those firms.

The appellate panel shot down Cynba and Community Planning’s claim that Charter One “fraudulently represented to defendants that it would finance potential buyers of defendants’ homes.”

“There is no language in the loan agreement [with Charter] making repayment contingent upon financing for potential homebuyers,” the opinion says.

“And I know one thing,” she previously told MT, “all this money they’ve been giving him should’ve been going to their [mortgage].”

Some of the residents completed a credit repair program and homeowner class, per HUD guidelines, which “cost plaintiffs hundreds of dollars,” Fluker wrote in a court filing.

EVICTIONS LAUNCHED
By January of 2013, Barclae obtained eviction judgments against a number of residents for “non-compliance of the terms of their occupancy agreements,” Dyer previously said. At the same time, though, Charter One got a receiver installed to oversee the project. According to Dyer, the receiver, Derron Sanders, failed to properly follow through on the judgments.

Soon after, the developer initiated new eviction proceedings, as the previous actions had expired.

It was around this time that some of the residents stopped paying rent. That’s with good reason, said Fluker. “They were trying to evict [the residents] during that time period, and there were numerous people alleging we should get the rent,” she said, adding, “[The residents] didn’t even know who had legitimate ownership.”

That’s when Fluker filed the suit in circuit court on behalf of the residents. The complaint accused Barclae of breaching contract with the plaintiffs, violating the Michigan Consumer Protection Act, promissory estoppel, and sought a “quiet title” to the property.

The residents also accused Barclae of being in tax foreclosure on a number of properties. Dyer said they owe “approximately $200,000” in back rent, which, if received, would ensure Barclae wasn’t “behind on the taxes.”

“I know he’s been charging these people for years and they still haven’t had an opportunity to purchase their property, which is the whole program — that’s what the whole program was designed to do,” she said.

Separately, to the dismay of the residents, as the eviction proceedings were launched, Barclae signed a purchase agreement with a Singapore-based developer, Midas Development Corporation for the homes, which were presented on the company's website as being for sale.

Attorney Dyer previously said a deposit was paid by Midas for the Gratiot McDougall homes, which were "held at a title company and we were moving toward closing prior to litigation being filed.

Midas, it seemed, was unaware of the problematic situation. After the Detroit Eviction Coalition protested at Midas Development's office in Pontiac, the homes were removed from the company's website within 24 hours.