Mixed reaction among some for Riverside Park deal with Moroun 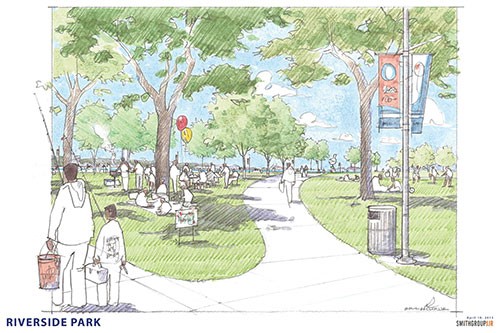 A deal that would bring new windows at Michigan Central Depot and millions of dollars of investment to Riverside Park has drawn a mixed reaction among Detroit officials.

The deal — which requires approval by Detroit City Council (though, by the choice of words used by Duggan's administration in the press release — "once the agreement is approved by Detroit City Council" — announcing the deal one may think that's a foregone conclusion — calls for Moroun's Ambassador Bridge Company to transfer 4.8 acres of riverfront property to the city, as well as spend $3 million in improvements to Riverside Park.

In return, the city will transfer three acres of undeveloped parkland to Bridge, a move that will facilitate the extension of Moroun's longshot dream to build a second privately-owned span.

In addition, the Moroun family has agreed to install 1,050 windows at the train station by the end of 2015. The Bridge company would pay the city $3 million upfront for additional Riverside Park improvements. If Moroun lines up the needed approvals for the new bridge — a minuscule chance, at best — then Detroit would receive an additional $2 million payment.

“This agreement gives the city the land and funding it needs to create a marquee park at Riverside and give Detroiters even greater access to our riverfront,” said Duggan, in a statement. “At the same time, it provides a dramatic improvement in the appearance of the Michigan Central Depot, making the future redevelopment of that landmark more likely.”

The funds for the city would be focused on property located at Riverside's north end. As part of the deal, a new baseball diamond, soccer field, and multi-use play area would be constructed, along with improved landscaping, picnics, benches, and a playscape.

The plans weren't hailed by all.

"I am deeply saddened today that after ten years of protecting and rehabbing Riverside Park through Bridgewatch Detroit and volunteers, that our Detroit Mayor would move forward in negotiating with the biggest slum landlord in the state, Matty Moroun," wrote former state Rep. Rashida Tlaib (D-Detroit) on Facebook.

Tlaib said Duggan's actions are "disturbing" because the community wasn't consulted on the project — a community that, she added, "worked so hard to get the park back from Matty after he illegally took it and destroyed the baseball diamonds."

“I am deeply concerned about the lack of community engagement in deciding the future of Riverside Park," Chang said in a statement Wednesday. "Many years of community involvement in the park and its various community activities should not be forgotten. My understanding is that much of the park will remain open to the public."

Chang added she was concerned about the long-term implications of the land transfer given there's a proposed new international publicly-owned span coming soon to the area. Perhaps surprisingly, Duggan said he supports both proposed new bridges.