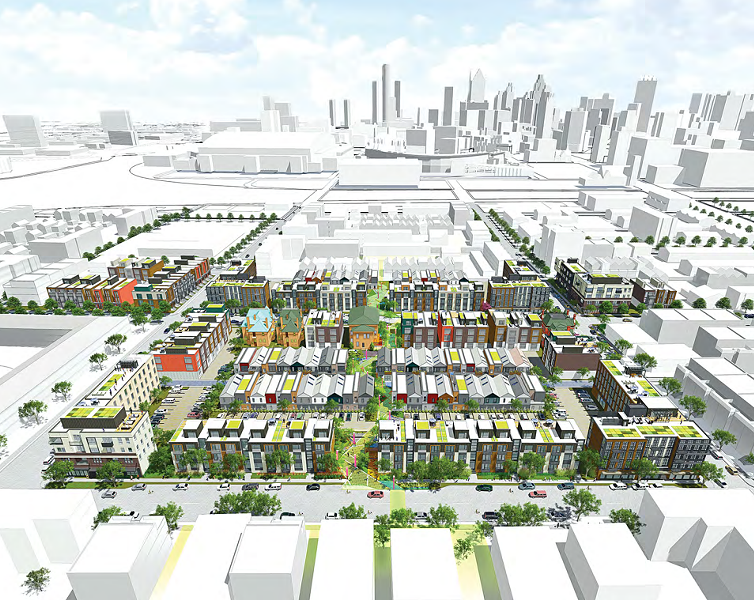 The plan, still in the early stages, requires approval by Detroit City Council for approval. Representatives from the developer on Wednesday said details of the project could change during the process.

During the announcement, Duggan recalled his time as the head of the public authority that helped facilitate the construction of nearby Comerica Park, and his expectations that Brush Park would witness an influx of economic activity. When he moved to Detroit Medical Center as the hospital chain's chief executive officer in 2003, Duggan said he'd drive through the neighborhood, puzzled by the sight of that never coming to fruition.

"For the life me, I couldn't figure out why this area didn't go next," he said.

The redevelopment plan calls for 337 residential units, situated within an earshot of the new M-1 Rail line, a 3.3-mile streetcar system along Woodward. At least, least 20 percent of the residential units will offered at affordable rates — which Duggan said is 80 percent or less of the average median income of the region (AMI).

"We're building a neighborhood that's going to be available to everybody," Duggan said.

(In Detroit's case, according to most recent Census figures available, the 80 percent AMI works out to $37,950 for a single-person household, or $54,150 for a family of four. The average median income for a family of four in the region, Census figures show, is $67,770. Take this back-of-the-envelope math with a grain of salt, but if you use 30 percent of one's income as a guiding principal for rent, that's roughly as high as $950-per-month for a single household.)

Under the current proposal, residential units will be offered both for-sale and for-rent, officials said, and will include apartments, townhomes, and flats, along with multi-family options. The developer says retail and green space will be also be included in the 47-parcel development, which is generally bounded by Edmund Street to the north, John R to the west, Brush to the east, and Alfred to the south.

In addition, four historic homes in the neighborhood will be restored, a requisite for the bidding process.

"We're going to preserve history, and build around them, not just bulldoze them," the mayor said. The city received nine bidders, of which four were considered potential candidates, he added.

The development team — which includes Marvin Beatty, who's behind the redevelopment of the State Fairgrounds site; former Detroit deputy mayor Freman Hendrix; Sam Thomas, a developer who has completed work in Benton harbor; and Bedrock — will be required to to commit 51 percent of Detroiters to construction jobs, and 31 percent of construction costs to Detroit-based contractors.

Steve Rosenthal, principal of Brush Park Development Partners and Bedrock, said Wednesday the developer currently has no plans to use tax credits for the project.

Brush Park was established in 1860, making it one of the oldest neighborhoods in the city, according to the Detroit Historical Society. The neighborhood had more than 400 buildings, including 70 Victorian mansions, at it's height, city officials said. Some of the homes were occupied, among others, by David Whitney, JL Hudson, and Albert Kahn. For a period, it drew the moniker of "Little Paris," thanks to is enormous homes.

By 1960, however, the neighborhood was abandoned, the society says, but recent developments have continued in the years leading up to Wednesday's announcement.

Officials said restoration of the historic homes is expected to begin later this year, major work on the project will follow in 2016, with everything wrapped up the following year.