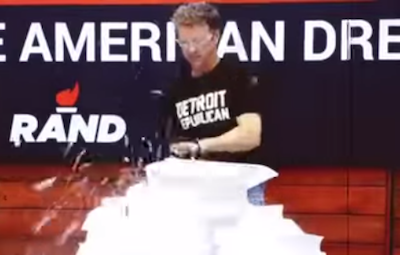 A piece in Fortune magazine alerts us that Tea Party supporter and U.S. presidential candidate Rand Paul was sighted wearing a Detroit shirt. The piece found it only worth passing mention that a recent video posted to You Tube shows the U.S. senator chainsawing through a 70,000-page copy of the U.S. tax code, at least before running it through a wood chipper and setting it ablaze. No, what the piece felt was bizarre enough to comment on was the shirt Paul wore, which bore the words "Detroit republican."

But as you read the piece, it makes sense. The author sees nothing strange about Paul's antics. What draws her attention is the apparent oxymoron on his T-shirt. Because the piece is a loving look at some of the more crackpot schemes right-wing politicians and business leaders have proposed for Detroit, all taken with the same generous grain of salt that makes a chainsaw-wielding politician go down so smoothly.

Paul says that the shirt was a gift he received during a visit to Detroit last year. Presumably, it was a joke, probably a sympathetic one. And one doesn't need to do a Google search for "Detroit" and "republican" and try to turn it into a story.