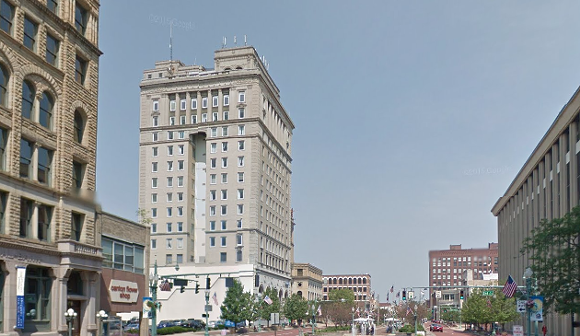 Every once in a while, a small news item of little apparent importance catches our eye. In this morning's case, it was the story of a man from Detroit who was shot to death in Canton. Nope, not Canton, Mich., but Canton, Ohio. According to The Repository, a news outlet in the small Ohio city, 32-year-old Alondo Perry of Detroit was killed by Jermaine Adams, 40, a Canton resident who was originally from Detroit.

What makes this notable? Well, on a personal level, we've been to Canton. Like a lot of small cities in 21st century America, it has seen better days. A century ago, it was the cradle of American football; today it hosts the Pro Football Hall of Fame. It's one of those little cities that has plenty of historic architecture, and yet when you want a bite to eat on a Saturday night it can be a challenge to find something between fine, cloth-doily dining and the wax-paper dining of a bar and grill.

What else is interesting about this story? Perhaps it's the way we in metro Detroit tend to think of violent crime as a big-city phenomenon, and to regard places like Ohio as sanctuaries insulated from crime.

And yet a real estate blog named Canton, Ohio, as the second most dangerous small city in the United States, based on FBI data from 2012. Clearly, things aren't perfect everywhere in the Buckeye State.

But this shouldn't come as a surprise to anybody who's been following the numbers. Though Michiganders of town and country love to heap condemnation on Detroit for its ills, smaller cities, such as Saginaw and Flint, aren't immune from the same forces driving Detroit's predicament — and bloody reputation. (Poverty and violent crime go hand in hand, of course. Call it a correlation if you want, but that's a bunch of silly pussyfooting: We all know that people with six-figure incomes and two BMWs in the garage seldom gun down their buddies.)

In fact, what used to be called "urban problems" are increasingly less urban, driven less by how dense a place is than what the income level is of people who live there. And it's becoming more stratified as time goes on. The insightful critic of inequality Robert Reich has been one of the few people sounding the alarm, pointing out Supreme Court rulings that only engrain more deeply what he calls "economic apartheid."

But it's not just the country's big cities, it's the small ones too, such as Wilmington, Del., Jackson, Tenn., and good ol' Canton, Ohio.