This weekend's White Castle reunion — and why Detroit needs a dragway 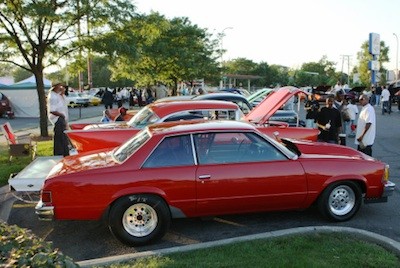 The White Castle Reunion, a celebration of street racing culture in the 1970s and 1980s, is returning to the city's west side this weekend. Why is it taking place at the White Castle at Livernois and Warren? Because that was the meeting place back in the day for the west side's street racers. The event is authorized by the city of Detroit, and, naturally, there will be no actual street racing. Proceeds will benefit Children's Hospital of Michigan.

Of course, street racing has been in the headlines recently (our headlines, in fact), due to the Detroit Police Department's task force to crack down on the illegal activity. We've noted, street racing is illegal, and certainly can be dangerous to anybody unlucky enough to be caught up in it.

And yet, it's not as if the city is overflowing with venues that allow legal drag racing. We recalled that White Castle Reunion organizer Paul Humphries once led an unsuccessful campaign to establish a dragway at Eight Mile and Woodward. Certainly, that would drain a lot of the illegal activity off the city's streets and channel it into a place where racers can be monitored for safety.

We called Humphries up to ask him about it. He made a documentary about Motor City street racing back in 2008, and lobbied for the drag strip. The  proposal went nowhere then, but Humphries hopes to try again. He says, "City Council at the time didn't listen to me. Now there's a new City Council. Even the mayor said if somebody came to him with the right proposal, he'd consider supporting the idea."

Unfortunately, Humphries relocated to Arizona, even though he still comes back for these special events. But he'd like to pursue a program whereby high school-age kids get taken under the wing of professional racers, and get a visit to an official racing track, such as Milan Dragway.

Humphries explains what he wants to do, saying, "I've been talking to some of the racers, and we've been talking about doing a thing called Adopt-a-Kid for a Day. ... They'd take them out to the track with their trailers and cars, and show them how to do it right, show them what it's like at the track, and keep them from going into the streets. ... We gotta try something to help out. There's about 15 guys with trailers, professional racers, that are willing to do this at least twice throughout the summer. And at the same time, it will bring awareness to the kids that there are High School Nationals that these kids can also be involved in, that they can represent Detroit in. There's a lot that the kids don't know, and if they're growing up around street races, that's all they're going to know. So we're trying to educate them a little bit and show them how to do it right."

He adds, "You probably can't stop everybody from street racing, the guys who are already out there, but we can start stopping them at the beginning, before they get out there. ... Let us get something, even if it's an eighth-of-a-mile stretch. At least they'll have the experience of building a car and testing it out, and doing it legally. Unless you teach them, they're not going to know."