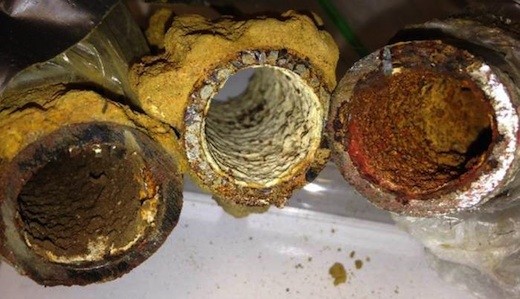 Claims by state and local officials that Flint’s municipal water is safe to drink are being put to the test in a precedent-setting independent study.

So far, those claims are emphatically failing to pass muster.

Researchers from Virginia Tech — working with a group of Flint residents and the ACLU of Michigan — are conducting an extensive analysis of lead and copper levels in water flowing into the homes of Flint’s residents.

Initial findings show the problem is roughly twice as bad as the city’s tests indicate.

What’s been dubbed the Flint Citizen Science Study is still under way, but the early findings have been so disturbing that the Virginia Tech team is posting results on the web in order to alert residents about how extensive the problem may be.

“I think it would have been unethical to not release this information right away,” said VT professor Marc Edwards, who is leading the project.

According to U.S. Environmental Protection Agency regulations, the city would be out of compliance if 10 percent of homes tested were above the action level of 15 parts per billion lead. The city says its latest sampling, conducted during the first six months of this year, shows that Flint’s water is in compliance with federal regulations, according to documents obtained by the ACLU of Michigan.

That claim is based on tests conducted at 69 homes.

The VT study is looking at nearly four times as many homes. Of the 120 samples analyzed so far, 20 percent have been over the federal action level — twice what it would take for the city to be out of compliance.

“Needless to say, these data are very worrisome,” said Edwards. “There are a disturbingly high number of homes with lead levels in a range where water consumption has caused lead poisoning in children and adverse pregnancy outcomes.”

Flint Mayor Dayne Walling and the Michigan Department of Environmental Quality both failed to respond to requests to comment on this story.

Edwards said that a study of this type — with residents leading the effort — is unprecedented.

Impetus for the project grew after the ACLU of Michigan in early July disclosed an internal U.S. Environmental Protection Agency memo that raised concerns about the water-sampling methodology used by the City of Flint.

One major concern is that the city, operating in accordance with Michigan Department of Environmental Quality protocol, instructs residents to “pre-flush” their water lines prior to testing. Residents are told to run their water for about four minutes in advance of taking a sample, which limits the amount of time water can absorb lead and copper from pipes and fixtures prior to testing. As a result, the amounts of metals that will be found are minimized, and the possibility that worst-case scenarios will be missed is increased.

Miguel Del Toral, a water specialist for the U.S. EPA’s Region V, characterized the city’s method as the equivalent of finding a “loophole” in the law and exploiting it.

Edwards agreed, contending that “no legitimate scientist” would say that the pre-flushing approach is an acceptable way to test for lead.

He also said that, based on recent tests the VT team conducted, high lead levels were to be expected, in part, because water from the Flint River is so caustic.

While under the control of a state-appointed emergency manager, Flint switched from using Detroit water as its source to the Flint River in April 2014, ostensibly as a cost-saving measure. Since then there has been a constant stream of water quality problems, with residents complaining of a variety of health issues and water that’s often brown or yellow and frequently four-smelling.

According to Edwards, Flint’s water is at least four times more corrosive than Detroit’s, causing infrastructure to break down and lead to be released into the city’s drinking water. As a result, his study’s disturbing findings are not surprising.

Edwards, a former recipient of a MacArthur Foundation “genius grant” who discovered widespread problems regarding lead in Washington, D.C.’s water in the early 2000s, applied for an emergency National Science Foundation grant to fund the study currently taking place.

Three hundred sample kits arrived in Flint on Aug. 19. Since then, a team of residents representing such local groups as Concerned Pastors for Social Change, Water You Fighting For?, and the Democracy Defense League — all of which are part of a lawsuit seeking to force the city to return to the Detroit system — has been recruiting volunteers to have their water tested.

As of Tuesday, more than 265 sample kits have been collected and returned to Virginia Tech. The community-driven effort has exceeded all expectations regarding resident participation, said Edwards, who noted that the project would have been considered successful if at least 75 of the kits had been returned for analysis.

“The response shows how concerned the people of Flint are about the quality of their water,” Edwards said.

Curt Guyette is an investigative reporter for the ACLU of Michigan. His work, which is funded by a grant from the Ford Foundation, focuses on issues involving emergency management and open government.