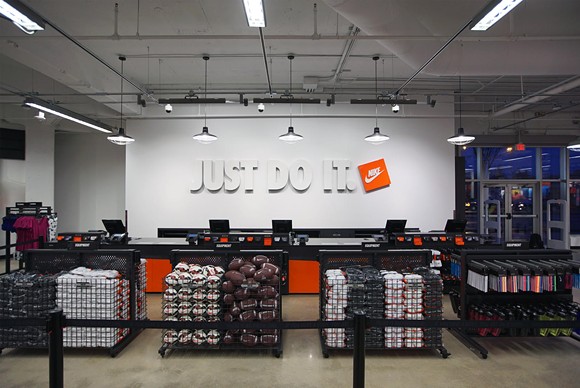 Resident billionaire Dan Gilbert's quest to rebuild downtown Detroit in his image continues. Gilbert took to Twitter on Wednesday morning to confirm news that Nike is slated to open a Detroit store this spring.

Gilbert ended the tweet with, "Believe. Then see it." (Which sounds like his attempt at his own version of Nike's "Just do it.")

Talk of a Detroit Nike store has been floating around since August, when Fathead CEO Patrick McInnis teased the news.

The store will be located at 1261 Woodward Avenue, nearby recently opened Moosejaw and John Varvatos stores. According to Crain's Detroit Business, the Detroit store will be differ from most Nike stores in that it will be a "Community Store." According to Nike's website, its community stores “support volunteerism and allocate volunteer hours to sport- and non sport-related efforts.”

Of course, the "community store" angle might not be enough to curb critics of downtown's recent headfirst dive into the wonders of late capitalism as so many residents continue to struggle. Observe recent tweets by Detroit writer Niraj Warikoo, who appropriated Gilbert's easily parodied slogan.

"Detroit is officially the poorest big city in America, but it is getting a Nike store downtown," Warikoo tweeted. In a follow-up he added, "Thousands of Detroiters are getting pushed out of their homes and their water shut off. 'Believe. Then see it.'"

Detroit is officially the poorest big city in America, but it is getting a Nike store downtown: pic.twitter.com/VtkPSjFyNy

Thousands of Detroiters are getting pushed out of their homes and their water shut off. "Believe. Then see it." pic.twitter.com/y75qJNz9TJ