New emails from the Department of Technology, Management and Budget (DTMB) show that the Snyder administration secretly trucked clean water to Flint's state house in January 2015, nearly nine months before Gov. Snyder publicly acknowledged the elevated lead levels in Flint's drinking water, and nearly a year to the day before Snyder declared Genesee County, home to Flint, a state of emergency.

The docs, obtained by Progress Michigan, show the January 7, 2015 announcement that water coolers would be delivered to each floor of Flint's state house. The facility notification explains that the water coolers would be placed next to water fountains so that government employees "can choose which water to drink."

The DTMB email was sent five days after the city of Flint issued an advisory warning of high levels of trihalomethanes — a disinfection byproduct — in the water. While the notice cautioned that sick and elderly people may be at an increased risk and should get advice from their health care providers about drinking the water, the advisory said everyone else was fine to continue consuming the Flint River water.

Okay. So let's get this straight: state employees are given clean water and Flint citizens are told it's A-OK, "relax." Lovely. 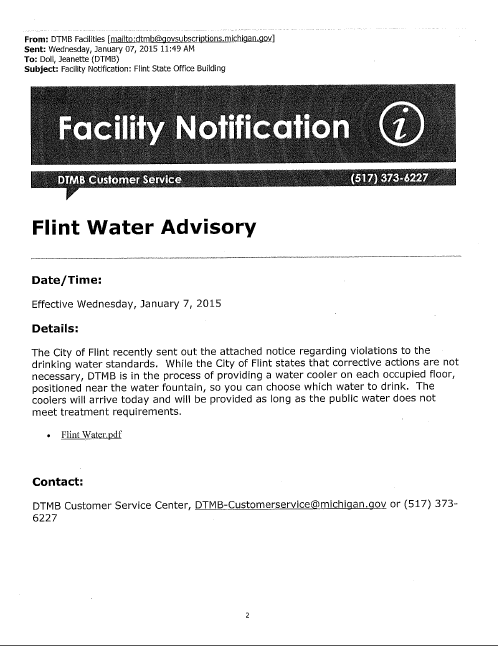