February 04, 2016 at 6:23 PM
comment
New emails reveal that Gov. Rick Snyder's administration was aware of the uptick in Legionnaires' Disease in Flint — and it's potential connection to the Flint River — nearly a year before the public was informed about the outbreak.

The emails, obtained by Progress Michigan, show that in March 2015 top Snyder aide Harvey Hollins received a number of emails from disgraced MDEQ spokesperson Brad Wurfel that discuss the outbreak of Legionnaires' Disease in Flint, and how it could be connected to the Flint River.

The public, however, was not made aware of this reality until January 2016, when the governor held a Flint press conference and Nick Lyon, director of the Michigan Department of Health and Human Services, shared the news.

According to Lyons, between June 2014 and November 2015 87 Genesee County residents got Legionnaires' disease and ten died from it. In the four years prior there were only six to 13 cases. In other words, there were potentially more people who died from Legionnaires' Disease in that year and a half period than people who got the diseases in the four year period prior.

While at the press conference Lyons and Gov. Snyder maintained that they were unsure if the switched water source was directly responsible for the uptick, the emails sent to Hollins a year prior indicated that the connection crossed the mind of at least one Genessee County health official.

In a March 10th email to Flint leaders and the MDEQ, Jim Henry, Genesee County’s environmental health supervisor, wrote, "The increase of the illnesses closely corresponds with the timeframe of the switch to the Flint River water. The majority of the cases reside or have an association with the city."

He also noted, “This situation has been explicitly explained to MDEQ and many of the city’s officials. I want to make sure in writing that there are no misunderstandings regarding this significant and urgent public health issue.”

This email was then forwarded, three days later, to Hollins by Wurfel, who wrote: "Jim Henry with Genessee County Health is putting up the flare. He's made the leap formally in his email that the uptick in cases is directly attributable to the river as drinking source — this is beyond irresponsible, given that is his department that has failed to do the necessary traceback work to provide any conclusive evidence of where the outbreak is sourced, and it also flies in the face of the very thing a drinking water system is designed to do."

That might be true, but having lead in the water also flies in the face of the drinking water system's purpose. It also doesn't mean Henry's hypothesis is necessarily incorrect or irresponsible. In fact those from the Flint Water Study would argue that it's pretty solid.

In a January 13 post they explained, "A key hypothesis of our National Science Foundation RAPID grant is that the rapid corrosion of iron water mains in Flint would dramatically increase growth of Legionella in buildings."

The AP is reporting the governor's office is saying he was unaware of the outbreak and connection until recently. At 6:37 PM Thursday the governor released his own statement via Facebook repeating that the did not know about the Legionnaires outbreak until January 2016.

We're still left wondering. Hollins, after all, is one of the governor's top aides and Wurfel (who was sending the emails) is married to Sara Wurfel, the governor's press secretary at the time.

Read the emails for yourself. 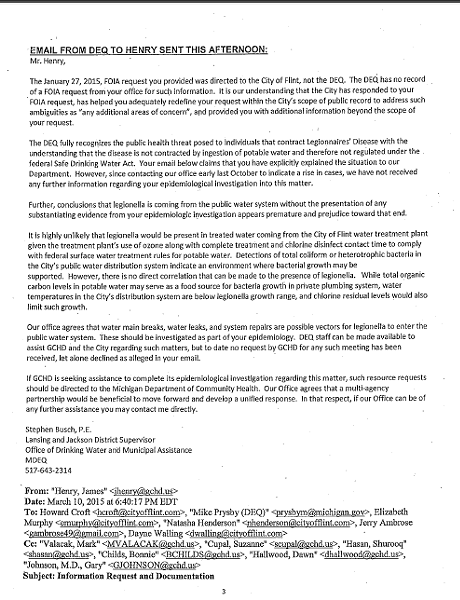 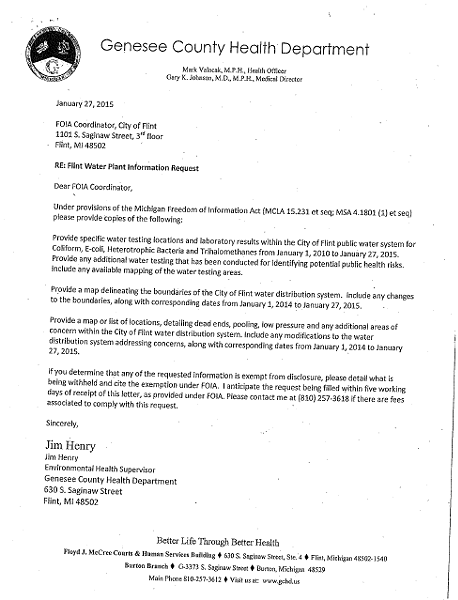