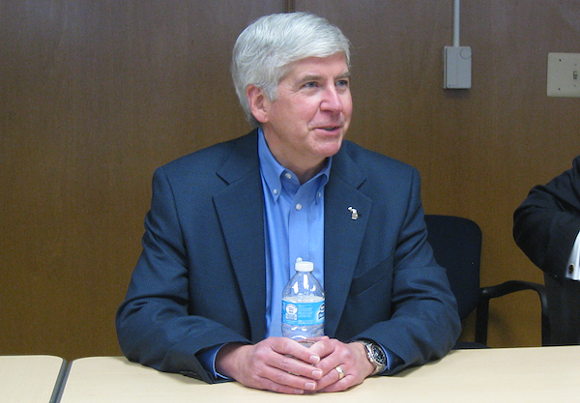 After several weeks in which the governor was seen at all-white photo ops 100 miles away from Flint, or during which we heard the story of his wife’s lavish birthday cake decorated with luxury items, it seems the governor has finally gotten his PR act together. Gone is the cake-eating, glad-handing, off-key imagery.

We’re beginning to see what must certainly be the handiwork of the image-burnishers. Yesterday, we received a press release that was professional, soothing, and designed to give the impression that things in Flint are improving, and, heck, maybe they weren’t even that bad in the first place! It was about low, low, low lead levels in Flint. It all but screamed in the voice of a TV used car salesman, “Hey, fellas! Look at how low these lead levels are!”

For the time being, let’s set aside any suspicions that the EPA, MDEQ, and the Snyder administration would do anything to skew the actual results. With so many eyes on their work, they’re probably adhering to best practices, and not pre-flushing household water lines before taking test samples. (You know, like they had before.)

But would the Snyder administration present the data in a misleading way that allows the layperson to think the problem isn’t that bad? Or maybe that it never was that bad to begin with? There’s a motive there, a powerful one: If the Snyder administration can convince enough people that the problem is a small one, it won’t go a long way toward helping the people of Flint, but it will help Snyder’s tattered political career, as well as the prospects for the Emergency Manager law he and his GOP pals pushed through over the objections of the people of Michigan.

It sounds comforting, doesn’t it? Something scientific-sounding seems to declare that there’s really not much of a problem. Oh, there are some lead levels, but they’re pretty low. And yet there are some things to be concerned about, though we’re not told what they are just yet.

It turns out “sentinel sites” are “locations across the city that will be continually tested to gather scientifically sound data needed to determine the safety of the water.” You know, the water that has been determined to be unsafe? The Snyder administration has entered the fray with a way to monitor just how unsafe the water is, again, in cooperation with MDEQ, the recently totally disgraced organization, and the EPA, another moderately disgraced organization.

“In order for Flint to truly move forward, we must be able to collect and analyze water data from these sites around the city,” Snyder said. He called the initial results “encouraging.”

Did you get that? An astounding 89.1 percent of the samples were below the action level! Isn’t that terrific?

You see, those results are the equivalent of a failing grade. As federal guidelines will tell you, if 10 percent of the homes are above the action level of 15 parts per billion, the city is out of compliance with federal safe drinking water standards.

And as for lead levels below 15 parts per billion, they aren’t necessarily anything to cheer about. The water in Detroit has 2.3 parts per billion. In Troy, it’s 1.1 parts per billion. What was the median lead level, we wonder, of those samples below the action level? Don’t bet your bippie it was as low as Troy’s. And, heck, according to the World Health Organization, “There is no known level of lead exposure that is considered safe.”

But, hey, you could be a Gloomy Gus over on the side of science, or you could jump on the Snyder bandwagon, where these results are encouraging, even upbeat — although concerns remain, of course.

And what are those little concerns again? Oh, yeah: the fact that the water, legally, is not considered safe to drink. Other than that, things are really looking up.