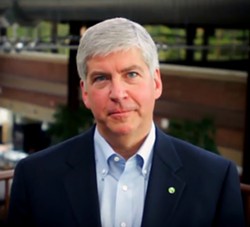 Are we the people paying for facts about the Flint water crisis to be obscured?

The Michigan Democrats sure think so.

So basically taxpayers are footing the bill for more than $1 million in private legal fees for Gov. Snyder — who as of now hasn't been charged with anything.

Complicating all of this is the fact that it would appear the new law firm is helping Snyder go through his emails and redact information that may not put him in the best light.

As the Detroit Free Press explains: "The letter and contract with Warner Norcross & Judd make no mention of searching, reviewing and processing e-mails and other records, which is how Snyder's office had described the contract's purpose. Snyder spokesman Ari Adler said March 3 that criminal defense attorney Brian Lennon of Warner Norcross had been hired in an investigatory role to perform those functions related to processing records."

So let's take a look at what Gov. Snyder released with the help of his new taxpayer funded lawyers.

A sampling of this bundle.

You get the gist.

“Not only did Snyder lie about why he was hiring a criminal defense team, but the heavily redacted emails he released today are all the evidence we need of the truth. He’s paying a high-priced law firm – with money that belongs to the people of Michigan – to protect him from the truth of his role in the Flint water crisis, clearly contained within the documents he’s releasing. Judging by how much information was removed, it’s obvious he’s getting his taxpayer dollars’ worth. It’s shameful that this governor would go to such lengths to hide the truth from the public, but it’s absolutely criminal that he would lie and use the public’s money to pay for it.”

What do you think?