A standing ovation for Gov. Snyder 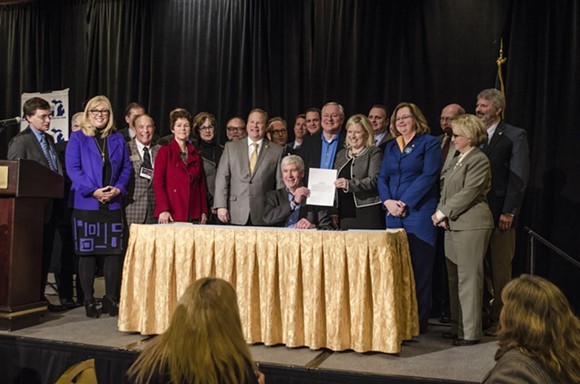 Of course, there are so many reasons to dislike him. You don’t need us to go down that list again, but, it didn't help that he and his allies in the legislature rammed emergency management legislation down the people of Michigan’s throats, right after they'd rejected it in a referendum. It didn't help that he cut off revenue-sharing to cities and then sicced unaccountable emergency managers with wide-ranging powers on them. The optics were bad, as they say, when it placed more than 50 percent of the state’s African American population under EMs. Then there's the way he has gamed the language of law in such as way as to ensure EMs stay in power as long as the governor’s office says so.

In fact, there's so much wrong with his administration that even the Flint task force that he appointed cites the emergency manager law as contributing to the crisis, and singles the administration out for blame. Being a Republican governor in Michigan should be a cakewalk, but his approval ratings have dropped to 52 percent, and, statewide, only 20% view the way he handled Flint in a positive light.

And that's just related to Flint and the emergency manager law. The statistics for the Great Lakes state don't look much brighter. The Michigan Municipal League points out that, compared to other state governments, Michigan's has cut revenue-sharing with cities to the bone between 2002 and 2012. One out of six Michiganders lives in poverty. According to figures from the U.S. Census Bureau, Michigan’s median household income is $49,087 per year, down 8.7 percent adjusted for inflation.

Add to this that the national news media has, quite rightly, piled onto the governor and his administration, and that he just got a drubbing from legislators while being grilled in Congress over Flint. In most places in Michigan, this guy's name is mud. A recent piece in Esquire magazine said of a Snyder press conference that, in a more just world, the governor would be ducking tomatoes or "a barrage of footwear."

So again: Who loves the governor? Like, really loves him enough to smile and applaud? How about enough to clap and unanimously rise and offer a standing ovation?

That would be the Economic Club of Grand Rapids. While giving a talk to the organization, a crowd of 500 stood up and offered sustained applause on Monday, March 21.

Of course, this is nothing new. Snyder knows he's loved in Grand Rapids. When he and key Republicans signed the bill offering some aid for Flint, it was done 100 miles away in Grand Rapids, where legislators from the west side of the state are clearly in his corner. You can expect Snyder to prop up his political career with such engagements, much like a terminally ill man seeking the healing powers of a fabled backwater.

Who are the members of the Economic Club of Grand Rapids? Their board and roster of officers reads like a list of the rich and powerful in Kent County. Vice-chair Dick DeVos is a billionaire known for funding right-wing initiatives. Many of the other officers are CEOs, CFOs, corporate presidents, and Republican legislators. Notably, their leaders do not exactly constitute "a beautiful mosaic of humanity."

But it prompts a deeper question about Michigan politics: When a leader like Gov. Snyder is so reviled by many, viewed unfavorably by the majority, and largely discredited across the country, what does it say that his backers, and some of the richest people in the Grand Rapids area don't just applaud him, but get up on their feet and do everything but give him a foot-stomping huzzah?

That's a question Breannah Alexander wrestled with in a piece in The Rapidian this week. She wrote: "[I]t shows that there was a room filled with people so disconnected in this community that they would applaud a criminal." Strong words, but certainly measured, given what many others in our state would say.