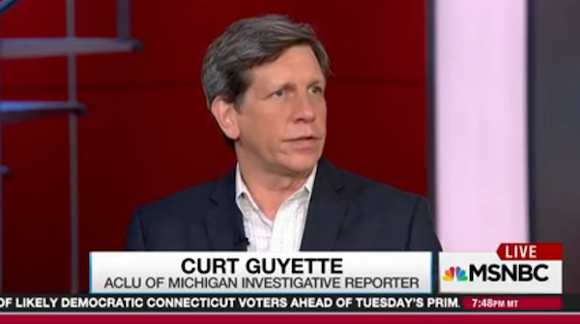 We can't get enough of Curt Guyette. The former MT news boss has gone onto a much more high-profile career as an non-newspaper journalist, working for the ACLU of Michigan. Thanks to a generous grant from the Ford Foundation, Guyette has used his skills to try to shine a light on what's come out of Michigan's emergency management laws, especially the fallout on such city services as schools and, more notably, the municipal water system in Flint.

We met with him recently and he pointed out that, last year, the activists organizing around the water in Flint were limited to a few dozen residents, receiving scant media coverage. How times change. This February, thousands joined a protest to demand answers and accountability. In fact, in January, the very week Gov. Snyder was being heckled in an Ann Arbor restaurant, Guyette was the toast of the town out in the Republican stronghold of Grand Rapids, being named "Journalist of the Year" at the Michigan Press Association awards.

Guyette's point, of course, is that a small, committed group of people on the side of justice still can't be ignored forever, and the ever-humble Guyette credits them for the tough work of gaining the world's attention, even as he's honored for telling their stories.

And these last few days have been full of honors for Guyette. He was out in New York to accept the prestigious Aronson Award for Outstanding Pioneering Reporting, and deliver a keynote address. Then he appeared on The Rachel Maddow Show in-studio to talk about the criminal charges filed by the Attorney General's Office. And last night he appeared on FOX2's "Let It Rip" segment to discuss Flint again.

Of course, Guyette would rather direct the fame at the fighting people of Flint, but it's worth taking a moment to cheer on our former colleague. Way to go, Curt!

You can watch his appearance on The Rachel Maddow Show below.