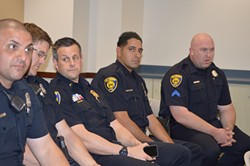 The Department of Justice announced Thursday that they'll be reviewing Dearborn Police Department's use of force practices, following two fatal shootings of unarmed citizens since December 2015.

"Community trust is vital to effective public safety," Ronald Davis, director of the DOJ's COPS Office, said in a statement. “I applaud Chief Haddad for working to improve the relationship between his department and the community and for taking affirmative steps to bridge any existing gaps."

In addition to reviewing the department's current procedures, the DOJ will be providing additional training to officers.

According to officials at the Thursday press conference, the DOJ's assistance is coming at the request of the Dearborn department.

In December an unarmed African American man, Kevin Matthews, was shot and killed by a Dearborn police officer after a foot chase. DPD say there was a struggle over the officer's gun during the chase and it resulted in the unidentified officer, who has since been put on administrative leave, firing multiple fatal shots at the 35-year old.

Dearborn residents, however, who rallied in support of Matthews following his death, were skeptical of the officer's reasoning for firing shots.

"We just can't keep shooting down unarmed citizens," Les Little, a 62-year-old Detroiter with the Your Vote is Your Voice political activist organization told MLive in January. "I know the police have a tough job, but that's what they signed up for ... There's a whole line of law enforcement agents who have tough jobs, but they manage to get the job done without shooting unarmed citizens."

While Dearborn police faced increased scrutiny following the death of Matthews, who family and friend described as an introvert who suffered from paranoid schizophrenia, the following month another individual was shot and killed by a department police officer.

In January Janet Wilson, a 31-year old, was shot and killed outside Fairlane Town Center. It is reported that she was shot after fleeing from mall security. According to the Detroit News, Michigan State Police say she "appeared to have tried to hit a security guard outside and a vehicle with a Chevrolet HHR, refused to stop for Dearborn police who tried to pull her over, then almost struck an officer while speeding away."

The two shootings are being investigated by the Detroit Police Department and Michigan State Police; however, in the interim civil rights organizations have been putting pressure on the Dearborn Department. This is what prompted them to request DOJ intervention and assistance.

"It's a step in the right direction, but it's not the resolution," Rev. Charles Williams, pastor at Historic King Solomon Baptist Church in Detroit who heads the Michigan branch of the National Action Network and is a representative of the Matthews family told the Detroit Free Press. "There is a serious issue with regards to what has happened in Dearborn. We're looking for justice. ... We're hoping that the culture of the Dearborn Police department will change."