The properties of one Dan Gilbert 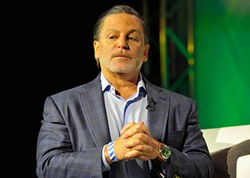 This week has been a big one when it comes to splashy announcements about the future of downtown Detroit — specifically, when it comes to the opinions and desires of our billionaire saviors Mike Ilitch and Dan Gilbert.

On Thursday, the internet was buzzing following the announcement that Ilitch's new, tax-subsidized Red Wings stadium will be named the Little Caesars Arena. How Detroiters ended up paying for one giant advertisement for the already wealthy and powerful Ilitch clan was the question of the day.

Mere days earlier, Dan Gilbert made the big announcement that he and fellow wealthy sports franchise owner, Tom Gores, wanted to team up to bring Major League Soccer to the city of Detroit. In a much publicized press gathering, they shared that they wanted to build the requisite soccer arena on the site of the never-completed Wayne County jail site on Gratiot near Greektown. While the county has said they would not sell the land, G&G's announcement definitely puts some pressure on them to make a deal.

And if we know one thing about Gilbert and property, he typically gets his way. That was somewhat confirmed in today's feature in the Detroit News, which tracked the property accumulation of Gilbert since 2011. According to Louis Aguilar of The Detroit News, businesses linked to Dan Gilbert have spent a total of $451 million on 62 downtown properties in the last five-years. This figure does not include 11 properties that various Gilbert companies have purchased, but don't have public sale figures.

The range in prices for the buildings is staggering. For example, in late 2014, Gilbert paid $142 million for One Campus Martius, the former Compuware building. On the other hand, Gilbert purchased from the Z-Lot property from the city for $1. (The sale of city properties on the cheap to developers isn't totally uncommon. In 2014, the city agreed to assist Ilitch in the building of his $650 million Little Caesars Arena, selling him 39 vacant parcels for just $1. And earlier this month, the city sold the former Tiger Stadium property on Michigan Avenue to Detroit PAL).

"Buying buildings ... that cheap is a very unique opportunity," Steve Morris, an adjunct professor of real estate finance at the University of Michigan Ross School of Business, told the News' Aguilar.

It sort of goes with the saying, you need to have money to make money, which also is highlighted by the fact that, according to Forbes, Gilbert's net worth has jumped from $1.5 billion in 2012 to $3.5 billion today.

Anyway, take a look at the Detroit News piece here.