DPS teachers return to work with promised pay, but other demands remain unmet

On Tuesday afternoon Judge Steven Rhodes, the Transitional Manager of Detroit Public Schools — with powers vested by Emergency Manager law PA 436 — met with leaders from the Detroit Federation of Teachers and promised that funds would become available to pay teachers through the summer.

The news means teachers will be returning to the classroom Wednesday, after two days of "Lock-Outs" following news from Saturday that the district did not have money to pay salaries.

"Our members want to work," Ivy Bailey, DFT president told Fox2 Tuesday. "They miss their children they want to educate their children, but nobody can be asked to work without being paid."

In March, following an announcement from Rhodes that DPS would run out of funds come May, the state legislature passed a $47.8 million "rescue plan" to allow the district to stay open through June. This past weekend, however, educators within the district were told that as of June 30 they would no longer be paid. For teachers who spread their pay out over a full-year — something two-thirds of the educators do, according to the union — this meant work they had already done was not being compensated.

The Lock-Out protests aimed to get a forensic audit of the district's finances to figure out where the nearly $50 million went and to get the pay that had been promised to the teachers when they signed their contracts last summer.

The meeting between Rhodes and union leadership Tuesday gets the teachers one of those things: Pay.

"There was a lot that came up," says DPS teacher Nina Chacker, about the following 4:30 p.m. membership meeting where the news was relayed to the educators. "There was a sense of celebration and relief when realizing immediate needs are met, but also dread about the fight ahead and how to leverge our power for that fight."

Chacker points out that the demand for the forensic audit still hasn't been met, and that the teachers' desire for voice and say when it comes to the districts future — i.e. the current legislative debates — still remains important.

"It's a red flag when a public school district becomes a school district under a different name," says Chacker, referring to the fact that both the house and senate plans divide the district into two entities — one that would pay off the debt and the other, named the "Community School District," that would educate students. "We should have public education forever, the fact that it's already being set up to be called something different makes me uncomfortable."

Other cities that have rebranded their public school districts — for example New Orleans with its Recovery School District — have been quick to push in favor of privatization (New Orleans is currently the first fully charter school district in the United States). 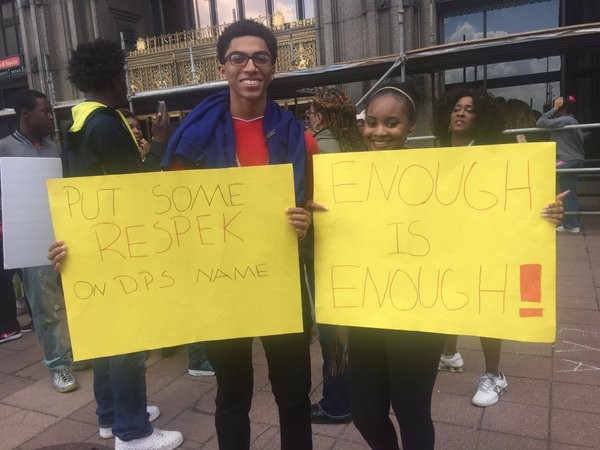 Chacker's skepticism of some of the legislative goals was reiterated by DPS teacher Tamika Morgan at the rally in front of the Fisher Building Tuesday morning.

"I feel like the bills are a ploy to break DPS up and go to charters," said Morgan, who was at the event with her kids Milton and Paris, who attend DPS's Cass Tech. "We've seen it slowly happening over the course of the years. The state say its trying to help DPS but we know, we see."

In 2009, when Robert Bobb, the first Emergency Manager in the recent succession of managers, came into power, the district had 172 schools and 95,494 students. Today that number has fallen to 97 schools, serving just over 45,000 students. This drop directly coincides with an uptick in charter schools and enrollment in the Detroit — today there are nearly 100 charter schools in the city and over-half the city's students attend one of them.

Fears of what is to come —  compounded by the fact that what Rhodes has promised is nothing more than what their contract already state — has some educators questioning if returning to the classroom so soon is best way to ensure long-term changes for a district whose fate rests in the hands of legislators many miles away.

"If the money is there now, then where was the money on Saturday? We should push for a forensic audit and we should stay out until this bill is off the table," DPS teacher Emma Howland-Bolton wrote in a post for the Facebook group 'DPS Teachers Fight Back,' Tuesday afternoon.

One hangup that has been raised it that in order for the teachers to get paid for the remainder of the year, as Rhodes has promised, legislation in Lansing must pass. While the AFT and DFT support the senate's bill (the house bill has been widely criticized for being far too punitive and not offering enough money) there are some teachers who believe both legislation have flaws that must be addressed, and returning to the classroom may look like passive approval.

"We need to change the conversation and not celebrate crumbs," Howland-Bolton's post continued. "I know we all the thought it might be worse, we were stealing ourselves for the worst, but this leaves us vulnerable for this happen again. What will it take for us to take control of our own story?"

Chacker, for her part, remains optimistic that returning to the classroom doesn't mean the fight for the district is over.

"I think it's important to note that this was an empowering week for us so far and there is a lot of fight left in us DPS teachers," she says.