Detroit is the poster child for how urban freeways gutted U.S. cities 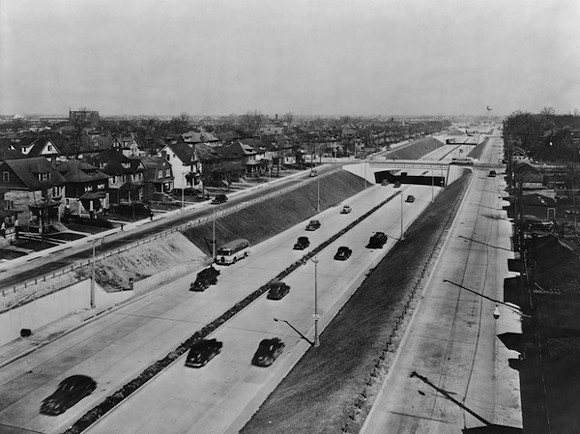 Is Detroit the poster child for the way the exuberant city freeway-building of the 20th century ripped apart the delicate urban fabric and left blight and emptiness in its wake? To varying degrees, the answer is yes. Especially if you ask people who are opposed to urban highway projects that continue here to this day.

New urbanist types have long argued that our priorities are all mixed up, that we should focus on ensuring our cities are dense, historic environments where it's easy to walk from place to place instead of trying to move as many cars through our cities as quickly as possible. This has been countered by the mythos of the car, the idea that the car represents the ultimate human freedom to move from place to place. And, for generations, that argument has usually won in any public debate.

And yet, it's not as if we didn't know that building freeways through cities was destructive. (One of the urban freeway's chief exponents, Robert Moses, once said, "When you operate in an overbuilt metropolis, you have to hack your way with a meat ax.") These days, people are increasingly viewing the urban freeway as a mistake. Across the country, cities are choosing to reject or decommission new or expanded urban freeways. And a younger generation is looking at the evidence and deciding it doesn't add up: If urban freeways were so good for our cities, why are the most vibrant and appealing sections of U.S. cities often so far away from freeways? Why isn't Detroit drowning in a sea of riches and why isn't downtown Ann Arbor a barren wasteland bucking for a Wal-Mart?

That's the thrust of a new piece up on Vox, and guess which city is used to illustrate how misplaced transit priorities can damage the urban tissue? Yup. Have a look. It's not exactly an in-depth piece on freeways vs. cities in the 20th century, but it does have this neat short video that makes its points well.


Be sure to scroll all the way down so you don't miss a Detroit double image in the piece: You can swipe your mouse back and forth and compare pre-freeway Detroit with the Detroit of today. Ask yourself which looks more like a great city.

See if you don't start wondering what Detroit might have been if not for that meat ax.