Detroit students share their dreams with Pictures of Hope

by Dustin Blitchok and Kyle Duda 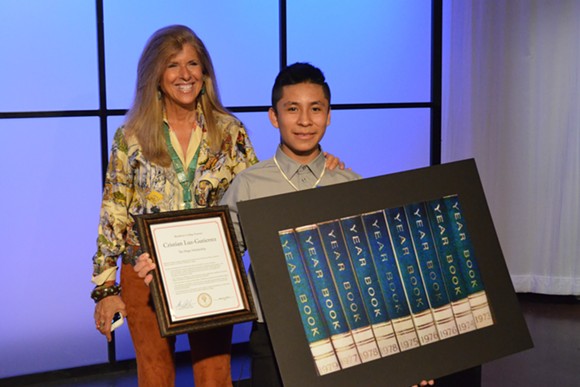 Cristian Luz-Gutierrez, 13, an 8th-grader at Cesar Chavez Middle School, starts at Cass Technical High School in the fall. At a reception at WXYZ-TV in Southfield, he learned he has a college education paid for and waiting for him at Blackburn College in Carlinville, Ill.

“It’s a lot of money to afford college,” says Gutierrez, who has a 4.05 GPA. His photograph for Pictures of Hope is of a row of yearbooks, which he says represents a college education.

Solomon has brought Pictures of Hope, which asks children to photograph their hopes and dreams, to dozens of schools and homeless shelters across the country. This spring’s program in eight Detroit schools was sponsored by Kroger.

“The dreams the kids express are life lessons for all of us,” Solomon says.
April Jenkins, the principal of Gutierrez’ school, says he came to Detroit from Mexico with his family when he was 7, and had to learn a second language while keeping up with fellow classmates.

“He is truly the epitome of what southwest Detroit is all about … he didn’t give up,” Jenkins says. “Five years, and he’s come this far — and just wait to see him in another five.”

Jenkins says paying for college is a particular challenge for students who are immigrants due to less financial aid options being available.

The second scholarship recipient, Jalon Nelson, 17, is senior class president at Communication & Media Arts High School on the city’s west side. Nelson says his photograph of a Blackberry smartphone represents business — something he’s been about for quite some time.

Rakiba Mitchell, senior counselor at Nelson’s school, says he’s “not a sheep — he’s a leader,” adding that he wears a bowtie to school.

“He’s always going to to stand on the side of what’s right.”

Nelson is already a mentor to his three younger siblings, and is looking to expand that role through a career in law enforcement, where he’d like to focus on fostering positive relationships between police and the city’s youth. Nelson’s Pictures of Hope mentor was Detroit Police Cmdr. Todd Bettison.

“If we can reach them when they’re young, it can make all the difference,” Nelson says. “It can put them on the right track and improve the world.”
The high school senior also has a scholarship offer from Michigan State University and now must decide which school to attend.

Dr. John Comerford, the president of Blackburn College, saw a segment about Pictures of Hope on NBC, and was so moved that he reached out to Solomon to see how he could help.

The Michigan Journalism Hall of Fame inductee and one-time Detroit News columnist — who shot the Academy Awards for more than 30 years and has photographed the likes of Muhammad Ali, Frank Sinatra, Robert Redford, and Beyoncé — has made changing children’s lives her life’s work.

Another one of those students is JaNyla Norwood, 17, a Cass Tech senior.
The aspiring orthodontist, who’s attending Michigan State University in the fall, proudly held up her photo of Cass Park. To Norwood, the photo represents the kind and nurturing part of Detroit, coupled with the city’s social and economic struggles.

“It’s where a lot of the city’s homeless hang out,” she says. The homeless weigh heavily on Norwood’s mind.

Norwood says she wants to make a lot of money — not for material purposes — but so she can purchase a building in a city. The building would give the city’s homeless a place where they can get the support needed to get back on their feet.

Cass Tech Principal Lisa Phillips says Pictures of Hope is a unique project for students such as Norwood.

“We all talk about (how) students’ voices should be heard. They were able to speak through art and photographs.”

Note: MT editor Dustin Blitchok served as a mentor during this Pictures of Hope program.