Why's a 9-year-old girl using the boys' bathroom at her school? 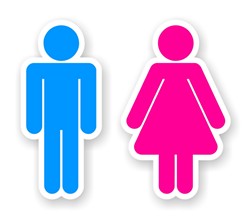 We probably don't have to explain the whole transgender bathroom debacle that's been going on for the last few months. If you haven't heard about the hullabaloo over where everyone should piss, educate yourself.

A bathroom bombshell was recently dropped on the parents of a 9-year-old who attends an elementary school in the Howell Public School district.

According to a Livingston Daily article, Matt Stewart says his son came home from school and told him a girl was using the boys' bathroom and had been told to look at the wall while the boys were told to stand closer to the urinals while relieving themselves.

Of course, the parents were outraged and concerned that their son, along with other boys who use the same bathroom, are being humiliated and intimidated.

But why's the little girl using the boy's potty in the first place? Due to privacy laws, school administration did not release any information about whether or not the girl was transgender.

There is no district-wide bathroom policy, and the elementary school's vice principal says she made the decision to allow students to use the bathroom of their choosing, according to the article in Livingston Daily.

Consequently, Stewart is pulling his three kids out of school.