Punk's Not Dead: The city sells land to Trumbullplex and not the Lorax Developer

As you've probably heard by now, the city of Detroit decided to sell two plots of lands to anarchist collective Trumbullplex Thursday. The sale of the neighboring lots — $5k a pop — is being deemed a win for punk, as the city selected the bid by Trumbullplex, which has maintained the vacant land for over 20 years, over that of Alex Pereira a local developer who put in the initial offer.

As Dan Austin of Mayor Mike Duggan's office explained it to a local daily newspaper, the decision to sell the land to Trumbullplex was made Tuesday by Jed Howbert, executive director of the Jobs and the Economy Team in Duggan's office.

"The bids were the same," Austin told a local daily newspaper. "And so Jobs and the Economy decided to go with the proposal that had the most community benefit."

Last week, Trumbullplex learned of Pereira's attempt to purchase the vacant lots, after the city reached out and gave them, as neighbors, an opportunity to match the developer's offer. Trumbullplex did, and also garnered public support for its cause. 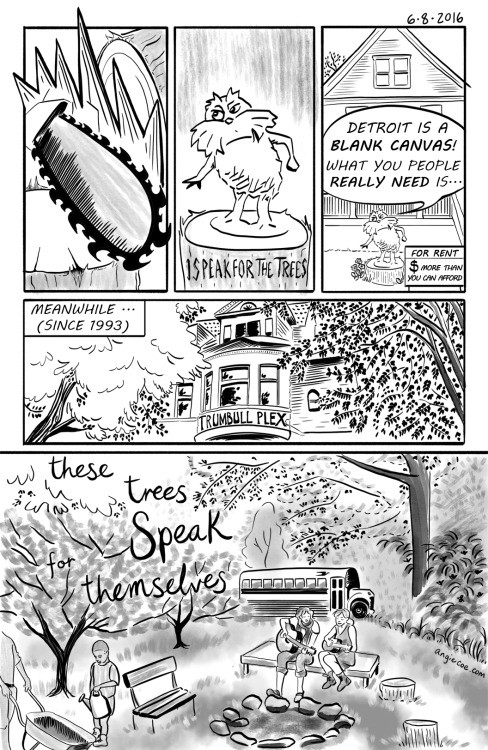 Since 1993, when the newly formed Wayne Association of Collective Housing (aka Trumbullplex) bought two houses on Trumbull a few blocks north of Grand River Avenue, the group has been tending to the land, making it a community gathering space and garden. While Pereira told Metro Times earlier this week that he planned to use the space for mixed-development (to deal with, what he perceives to be, a housing and business shortage in the Woodbridge neighborhood), Trumbullplex members shared with MT private Facebook messages in which the developer indicated that he would be open to building a parking lot on the land if he could get the permit. The idea of said parking lot provoked the current 11 members of Trumbullplex to write an open-letter, Monday night, asking the community for support in their attempt to keep the land.

While the city ultimately went with Trumbullplex's bid, Pereira maintains that his plan for the lot would have been better for the community — though it's unclear what that would have been.

"Our plan will build a higher tax base, create jobs, bring more people and raise the quality of life in our community," Pereira, who has renovated four houses in Woodbridge since 2012 and moved to the neighborhood last year, told the local daily newspaper.

As we previously pointed out, the squabble over the land between the developer — who tends to fix up homes in the image of Disney flicks — and Trumbullplex highlight clearly different viewpoints of what is in the best interest of Detroit residents and their future. More specifically it highlights differences in what it means to be a community member. While Pereira told the a local daily newspaper he believed his plan would have raised the "quality of life in our community," he also admitted that he did not tell neighbors (aka Trumbullplex) about his plans for the lots. As he told a local daily newspaper, "I didn't see a reason. ... When I'm trying to buy something from somebody, I don't go talk to their neighbor — I just buy from the person that owns the stuff. That's just how business works."

If someone is in the neighborhood today, perhaps they should leave a copy of Jane Jacobs' The Death and Life of Great American Cities on the stump of the Lorax figurine across the street.