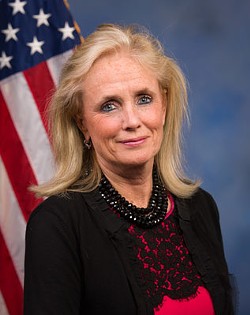 Since noon Wednesday, Democratic representatives have been sitting, standing, chanting, and singing on the floor of the House of Representatives, as they take part in a monumental congressional "sit-in," demanding a vote on gun control legislation that Republicans have refused to engage with.

The legislation they are asking for: a vote on a "No Fly, No Buy" bill that would prohibit the sale of guns to any terror suspects that are on the "no fly" list; more comprehensive background checks for gun buyers; and a requirement that the Surgeon General create and present an annual report on gun violence and its effects on public health.

As the representatives engaged in the sit-in, they have passed the time in a number of moving ways, namely speeches on the effects of gun violence both in their communities and personal lives.

One particularly poignant moment came when Michigan Rep. Debbie Dingell took to the podium. Dingell, who has spoken out previously about growing up with an abusive and unstable father, shared a story with the representatives and supporters in the galley about a time when her father once tried to shoot her mother.

"I lived in a house with a man that should not have access to a gun," she said in the early morning hours on Thursday. "I know what it’s like to see a gun pointed at you. And wonder if you are going to live. And I know what it’s like to hide in a closet and pray to God, 'Do not let anything happen to me.' And we don’t talk about it, we don’t want to say that it happens in all kinds of households, and we still live in a society where we will let a convicted felon who was stalking somebody, of domestic abuse, still own a gun."

You can watch Dingell's speech below — the video is grainy because House Majority Leader Paul Ryan turned off the microphones and CSPAN feed earlier in the evening, and reps had to resort to using apps like Periscope to document the sit-in.


One argument Republicans have tried to employ during this debate is that the gun violence epidemic America is facing today is a product of "radical Islam." During the sit-in, Rep. Louie Gohmert (R-Texas) began shouting: "Radical Islam killed these people."

While we could point out that Columbine, Sandy Hook, the Aurora shooting, the Planned Parenthood shooting in December, and the Charleston shooting last summer have nothing to do with radical islam, the reality is, as Dingell points out,the issues of gun violence in our country are even greater and more far reaching than the headline-grabbing mass shootings.

This sentiment, reiterated by representatives over the past few hours, is particularly true in Detroit, where a sample news story this week was a shooting on the Lodge highway. Considering this new normal, we look to the words of St. Louis based writer Sarah Kendzior, who detailed a reality eerily similar to Detroit in a recent piece on the gun violence debates.

"Gun culture is debated most after mass carnage. But it permeates our everyday routine, especially for those of us who live in the most violent states," she wrote after the Orlando shooting earlier this month. "My state, Missouri, leads the country in shootings by toddlers. The streets of my city, St. Louis, are lined with teddy bears tied to trees – makeshift memorials for shooting victims. “Rolling gun battle” is St. Louis vernacular for people shooting at each other from cars on a highway. One candidate for governor, Eric Greitens, fired an assault rifle into an empty field in a TV ad to appeal to voters. This is normal life."

Following the Orlando shooting, support for tighter gun control legislation increased by 9 percentage points, according to a recently released CNN/ORC poll, which also found that support for measures like a ban on those on the no fly list, is currently over 90 percent.

Despite public support for legislative changes, we see a House majority that wants nothing more than an eight-second prayer and tweeted condolences.