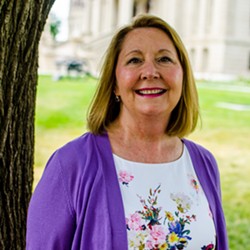 Michigan Gov. Rick Snyder's pick of a former BP executive and oil lobbyist to run the state’s environmental department set off intense criticism Thursday, as the selection comes several months after the previous chief resigned in the wake of Flint’s drinking water crisis.


Heidi Grether, currently deputy director of the Michigan Agency for Energy, worked as a lobbyist and executive for BP America during the company’s response to the Deepwater Horizon spill in the Gulf of Mexico, according to her LinkedIn page. She also served terms in both chambers of the Michigan legislature and previously worked as the former speaker of the House's legislative director.


“Heidi has decades of experience in environmental quality issues, and has effectively served during times of crises and recovery,” Snyder said in a statement. “Her expertise in delivering good customer service from a large organization will be of great value as we continue working to reinvent the department and act more proactively to address issues that arise."


Environmentalists and activists in Flint, which has been struggling to recover from a now two-year water contamination crisis, slammed the appointment, saying it illustrates a revolving door between government and corporations.


“I am infuriated but not shocked that Snyder chose to appoint someone who had a hand in one of the worst man-made water disasters and cleanup failures in history to head the MDEQ,” said Melissa Mays, a Flint resident and activist with local group Water You Fighting For, in a statement.


“We have spoken with residents who are still affected by the BP disaster and they expressed concern that Flint water will also not get cleaned up properly. As we sit here in Flint, still unable to safely use our water, reading about who Snyder handpicked to run the MDEQ, we see those fears are more likely to be realized.”


The Flint water crisis erupted after residents complained of smelly and disgusting tap water for months, following a decision in April 2014 by a Snyder-appointed emergency manager to use a local, corrosive river for drinking water.


By the time Snyder admitted the tap water of Flint residents had been contaminated by lead 18 months later, officials conceded that MDEQ failed to require the use of corrosion control agents that would’ve prevented lead from leaching off water pipes. In turn, residents’ trust in government was shattered.


Lynna Kaucheck, senior organizer for the Washington D.C.-based nonprofit, echoed Mays’ remarks and said the pick shows Snyder is “out of touch.”


“This is yet another example of the revolving door between government and corporate interests. Appointing an oil executive to oversee a critical and contentious pipeline issue when she will likely return to the industry after her time with the MDEQ is a major conflict of interest,” Kaucheck said in a statement. “It is also a slap in the face to the people of Michigan who deserve unbiased leadership from the state’s highest environmental position, especially in light of the ongoing Flint water crisis."


The governor’s office pushed back on criticism within hours. A spokesperson for Snyder told the Detroit Free Press that Grether was a “standout” among candidates for the job, particularly due to her previous roles.


“It’s unfortunate that people choose to publicly criticize her within hours of her appointment, rather than reach out to meet with her and discuss her plans for the department,” the spokesperson, Anna Heaton, said.


The Freep’s editorial board said it wanted to meet with Grether, but Heaton denied their request. Snyder’s request, the board wrote in an editorial on Thursday, is “astoundingly tone-deaf.”


“It's a stunning look into the way the governor views the state's responsibility to protect Michigan's environment, and Michiganders' health,” the editorial stated.


Pending consent of the Michigan state Senate, Grether will succeed interim Michigan Department of Environmental Quality Director Keith Creagh on Aug. 1. Creagh will return to his position as the state Department of Natural Resources director.