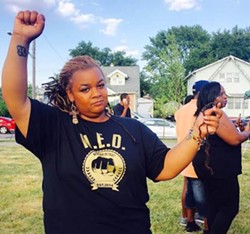 After Jamalcolm Ewing — one of five plaintiffs — was arrested following a June 7 traffic stop, three women who approached the scene were “arrested, beaten, and tortured by the denial of medical care for their questions …” according to the lawsuit.

Detroit police officers assaulted the women “with their fists,” the complaint states. Plaintiff Mikera Manning told the Detroit Free Press that she was kicked, slammed, and had her braids pulled out by a police officer.

The traffic stop occurred while Ewing was on a community patrol, a program the group previously discussed with Detroit Police Chief James Craig, including the use of flashing green lights in cars on patrol, according to New Era Detroit.

A police report on the arrests states that Ewing argued with an officer and was found to not have a valid driver’s license or registration, according to the Free Press.

In a video clip of the June 7 incident near Grand River and Wyoming, one of several police cars that responds can be seen striking a pole as it arrives on the scene. The video was taken by New Era Detroit members and posted by the Free Press with a story.

A Detroit Police Department spokesman called New Era Detroit's lawsuit "baseless" in an email to Metro Times.
"New Era Detroit has yet to serve the Detroit Police Department or City of Detroit with this lawsuit. The allegations in the complaint are false, and the city looks forward to vigorously defending against this baseless action in court," said Sgt. Michael Woody.

New Era Detroit says in its mission statement that its goal is to build black unity in black communities. In addition to community patrols, the group’s other stated initiatives include voter registration, the delivery of free, surprise meals to riders on city buses, and flash mobs of shoppers at local black-owned businesses.

“Our focus is empowering and encouraging black residents in the city of Detroit and around the world to buy, build, invest, and get involved in the communities that they live in.”