DPD's LGBTQ chat highlights strides made in the last year 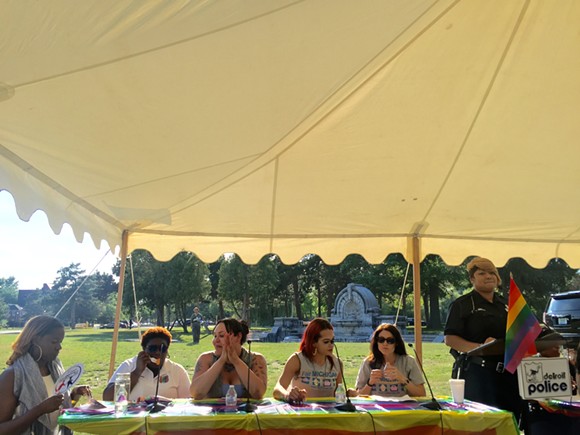 On Wednesday evening members of Detroit's LGBTQ community and the Detroit Police Department gathered in Palmer Park for 'Breaking Down Barriers,' the department's 2nd annual 'LGBTQ Community Chat' — a discussion on ways the two groups could work together and support one another, but also a celebration on how far the factions have come since last summer.

"One year ago I was here, I was on the panel, but I had no affiliation with any police ever," said panelist Lilliana Angel Reyes, a transgender woman of color who is the Program Services Director of Affirmations, a metro Detroit LGBTQ community center, and member of DPD's newly created LGBTQ Advisory Board.

Speaking to the positive changes she has witnessed since last year's chat she added, "I am not here to blow up and say, 'Oh the Detroit police are so awesome,' but they really are to be completely honest, and I'm very critical of police." 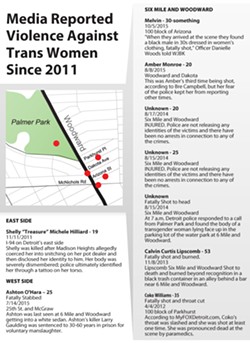 Nearly one year ago —  August 12, 2015 — Reyes and about 100 other people, including officials from the US Attorney's Office and the FBI, gathered in Palmer Park for for a community chat centered on "building trust" between the LGBTQ community and police.

The well-attended event, however, was markedly somber. Days earlier Amber Monroe, a transgender woman, was fatally shot while exiting a car on Woodward and Dakota St., across from the park. While Police Chief James Craig told press the meeting had been planned prior to Monroe's death, many in the community, such as Julisa Abad, a trans advocate, were doubtful due to the lack of publicity. More notably, they were curious as to why the meeting hadn't happened sooner.

"The meeting was long overdue," Abad told MT last winter while we were reporting our cover story The Throwaways.

For years those in the city's LGBTQ community — specifically trans women of color — have been the targets of discrimination and violence. Monroe was the second trans woman to be killed in the city last summer (Ashton O'Hara, who was last seen alive blocks away from where Monroe was killed, was murdered in July 2015) and the sixth trans or gender non-conforming person to be murdered since 2011. And these are just the deaths and violence the media has reported on.

"I've seen girls pushed out of cars, shot, walking down Woodward completely naked because they got stripped and robbed in cars," Abad told MT for the feature story. "This has been an ongoing thing."

So when last year's meeting occurred there were strains between the two groups, to say the least. The friction was compounded by sentiments that not only were the police not protecting the LGBTQ community, but were victimizing them as well.

"If you’re here, and you live in the Palmer Park area, and you come out to walk across the street to go and get something from the gas station you’re stopped and given a ticket for prostitution," Reyes, who praised DPD Wednesday, told the Guardian at last year's gathering, noting at the time that police focus on petty crimes such as prostitution often overshadowed "the violence, the hurt, the murdering of trans women."

This point is especially important considering many trans women face job and housing discriminating and turn to street economies — such as sex work — as a means to survive.

During Wednesday's event, questions and answers around these issues highlighted evolution in the understanding of the community's struggles.

When panelists, for example, were asked by an attendee what the stance was on trans women congregating on Woodward between Six Mile and Seven Mile — a stretch of the boulevard, where Johns are known to look for transgender women for dates — the answers given reflected shifts from what Reyes hinted at last year.

"It's not a crime to walk down the street, and so unless there is a crime, then it's ok to just walk down the street," LaShinda Stair, Detroit Police first assistant chief said. Highland Park Chief Chester Logan also noted that "This is one of the bridges we're trying bridge between the community and the young ladies on the street. They feel they're being victimized and quite frankly, it's our duty to look out for them the best they can."

Other notable shifts in yesterday's gathering included the inclusion of Dana Nessel, president of the Fair Michigan Foundation, who last month announced a partnership with the Wayne County Prosecutor's Office and the Detroit Police Department to investigate crimes against the city's LGBTQ community. Monroe's murder, which still has not been solved, is one of the first cases the team is taking on.

"We have an entire system in place where people can come and discuss what has occurred and see what we can do to work with police departments in Wayne County in order to facilitate a better system of justice," Nessel told the gathered crowd.

There was also testimony from Rebecca O'Hara, the mother of O'Hara, who spoke of her appreciation of DPD, and other allies, such as Equality Michigan, when it came to investigating her child's murder.

Rebecca O'Hara discusses DPD's response to the murder of her child #ashtonohara, a trans wmn who was killed Jul '15 pic.twitter.com/z3OTJqLbTd

While yesterday's gathering was definitely a point of celebration for the strides made, challenges still remain when it comes to building trust and relationships.

"During the community chat I noticed that there were about four trans women that were basically standing around and just watching," Abad, who sits on the LGBTQ Community Board and was hired recently by Fair Michigan for community outreach told MT.

"I am sad that they didn't go because I think that's what we're trying to do — break down barriers — but clearly there is still some mistrust or discomfort."

Which is precisely what the police hope to continue to repair, according to Woods. "In the past year more positive relationships between the LGBT community and Detroit Police have been built," she said.

"The mutual trust that has been longed for is now on the road to being mended and the understanding and education from each and the continuance of training and conversations shows a phenomenal promise of better days to come."