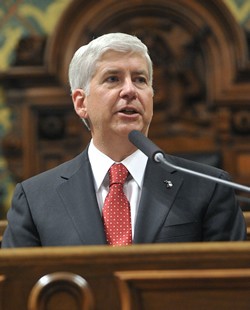 The survey, which covered 600 Michigan residents and was conducted July 30-August 1, showed that Snyder's approval rating dropped a few notches to 39.7 percent.

The numbers reflect a significant shift in voters' view of the governor, the News reports, as a poll from June 2015 pegged Snyder's approval rating at 55 percent. Ari Adler, a spokesperson for the governor, said his office won't be moved to act differently in light of the findings.

“Polls are often driven by current news reports, which have been negative as of late, but when you look at the big picture of how well Michigan is doing as a state, those numbers are very positive,” Adler told the newspaper.

Critics of how the governor responded to Flint's crisis have repeatedly called for him to step down from office, but Snyder, in front of a crowd at the business-friendly Mackinac Policy Conference, in June, sought to quell the discord, saying: "The reports of my demise are overblown."

But the poll issued Wednesday triggered more concern among some, as the results found 25% of Republicans also disapproved of the Republicans. Richard Czuba, CEO the Glengariff Group, which conducted the poll, told the News: "These are not great numbers, by any stretch."