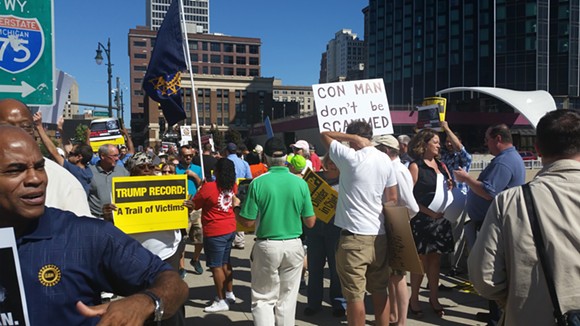 It was an active day in Detroit for Donald Trump opponents, as the Republican presidential candidate addressed members of the Detroit Economic Club (DEC) at the Cobo Center Monday.

A large group of protesters gathered outside the building at least an hour before Trump's speech was slated to begin. The area was patrolled by mounted police, and protesters rallied with a variety of signs and anti-fascist chants. Some of these signs were in support of groups that Trump had offended over the last few months, including women, UAW members, Muslims, African-Americans, and the disabled. The demonstration continued after Trump's address concluded. Some Trump supporters lingered on the edges of the main protest site.

Trump's visit was also criticized by the Michigan Democratic Party, which released a scathing statement.

"Donald Trump has returned to Michigan today, almost one year after declaring he would have let the auto industry go bankrupt," the statement read. "The fact that he would come to Detroit to tout his economic plan is either a sick joke or a complete lack of understanding of what drives the Michigan economy."

"Any truly successful businessperson in this country will tell you that Donald Trump is a snake oil salesman, who hides his ineptitude and failure behind neon lights and gold facades."

DEC Presiding Officer John Rakolta, Jr. surprised the audience by bringing out Indiana governor and Republican vice presidential candidate Mike Pence to introduce the keynote speaker. Pence called Trump a "dreamer, a builder, a driver," and declared the need for American companies to produce more goods, which set the tone for the rest of the afternoon.

Trump entered to a standing ovation and delivered a speech that lasted for about an hour. More than a dozen hecklers interrupted Trump and were escorted out of the Grand Riverview Ballroom by security. The hecklers were greeted with loud disapproval and their actions often encouraged DEC members to applaud Trump.

Trump's speech, an outline of his economic agenda, was tame. Many of his statements satisfied traditional Republican talking points, including calls for tax cuts, domestic manufacturing, deregulation, and the reversal of President Barack Obama's executive orders, health care plan, and climate-change regulations. Trump also derided the Trans-Pacific Partnership, claiming that he would withdraw from the free-trade plan if he were elected president.

Trump spent much of his time criticizing Obama and Democratic presidential nominee Hillary Clinton's economic and foreign policies. In what was likely the most inflammatory part of the address, Trump said: "The city of Detroit is the living, breathing example of my opponent's failed economic agenda."

As though Trump were aware of the need to shift from his typically fiery rhetoric, he argued that his economic plans would benefit all people, "especially ... those who have the very least." He said that under his administration, "no American company will pay more than 15 percent of their business income in taxes, [and] small businesses will benefit the most from this plan."

In an interesting turn, Trump said his campaign would soon provide details on a plan that would allow parents to deduct the average cost of child-care spending from their taxes. He said he had been working closely on the plan with his daughter Ivanka, who was in the audience.

Trump's address ended with a lengthy ode to American workers, beginning with a promise to put American coal and steel workers back to work.