Welp, it's official: this November you can vote on regional transportation 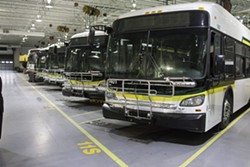 On Tuesday clerks of Macomb, Oakland, Washtenaw and Wayne counties accepted the controversial proposal to fund the Regional Transit Authority of Southeast Michigan’s (RTA) Regional Master Transit Plan. This acceptance — which came at the eleventh hour — means voters can now hit the polls this November and weigh in on a plan that aims to tackle many of the region's unaddressed transit issues.

"This is the opportunity Southeast Michigan residents have been waiting for – the opportunity to finally connect Macomb, Oakland, Washtenaw and Wayne counties," Kelly Rossman-McKinney, a spokesperson for A Coalition for Transit (ACT) said in a statement Tuesday.

Rossman-Mckinney estimates that less than a quarter of jobs in Southeast Michigan can currently be reached in 90 minutes using public transit because the region  — she, and ACT, blames this on the lack of a "frerequent, coordinated regional transit system."

"The RTA’s comprehensive, connected regional transit plan will increase independence for seniors and people with disabilities, get people to work and boost economic development," she says.

While the $4.6 billion public transportation plan may seem like an obvious to those like Rossman-Mickinney, the path towards getting it on the ballot was not a smooth one. In July representatives from Macomb and Oakland County poo-pooed the plan, arguing that it did not do enough for their regions.

"I cannot in good conscience support the current plan, which spends over $1.3 billion of Oakland County taxpayers’ dollars over 20 years, but only gives our businesses, workforce, and residents a fraction of that back in transit services," Oakland County Executive L. Brooks Patterson said in July.

These sentiments were reiterated by Chuck Moss, an Oakland County RTA representative who explained that he felt the plan didn't provide regional transit but rather "regional taxation."

The July rejection of the plan — which will connect over 2,600 square miles, 4 million residents and nearly 2 million existing jobs across Macomb, Oakland, Washtenaw and Wayne counties — meant some behind the scenes machinations had to occur. In August representatives from Detroit, and Wayne Oakland, Macomb, and Washtenaw counties met to discuss some sort of compromise that would get Patterson and his Macomb County counterpart, Mark Hackel on board.

"I am satisfied that the accord we reached today not only offers something for our 40 communities and over half a million residents previously left out of the transit plan, but also incorporates the necessary protections we were seeking for Oakland County taxpayers," Patterson, who the New Yorker has described as a "Suburban Kingpin who is thriving off the city’s decline," said in a news release after the private August meeting. “I’m grateful to my regional counterparts who joined me in moving forward."

Similar transit plans in other parts of the U.S. have shown a significant return on investment, according to the American Public Transportation Association, who estimates that they result in $4 for every $1 spent.