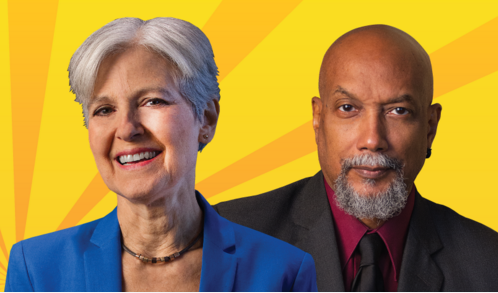 Green Party presidential and vice-presidential candidates Jill Stein and Ajamu Baraka will be in town this weekend, leading a campaign rally in Eastern Market.

It's billed as the "People, Peace and Planet over Profit Tour," and it will take place at a rally at Bert's Warehouse Theatre noon to 3 p.m. Stein and Baraka will address voters in their first appearance together since the Green Party's national convention in Houston a month ago. Topics will include injustice, social and environmental concerns, the horrendous water pollution in Flint, and more.

The Green Party has a higher profile than usual this year, given the way Bernie Sanders connected with voters on issues mainstream politicians usually remain mum on, such as wealth inequality, a living wage, and putting people before profits. No doubt many more voters than usual will be receptive to the sort of political rhetoric Stein and Baraka will lay down. Among the other speakers, which will include Green Party candidates, are even a few former Sanders delegates who've joined the Green Party.

Musical entertainment will be provided the Bill Meyer Group, with special guests Martha Reeves, Sturge Moreland, José Riojas, and others.