Where are all the campaign signs?

August 31, 2016 at 12:11 PM
comment
I enjoy walking around my little neighborhood in Hamtramck. The houses are all packed so closely together, there's usually something worth looking at, whether it's a gang of kids playing, the humble flower gardens in front of the houses, or the local cats strutting lazily in the summer heat. I imagine in other neighborhoods, you might almost feel strangely conspicuous walking around the hood, but in Hamtramck it's normal: people walk everywhere, and not just to find Pokemon.

And yet, even though it's a little early this year, I'm wondering where the election signs are. I've seen a few, but much fewer than usual. It seems I can recall other presidential election years when signs went out earlier than Labor Day, especially outstate, where people seemed to plant roadside signs as thick and fast as they could.

I know some of you are thinking that local ordinances prohibit election signs from being planted in one's lawn until 30 days before Election Day. Well, that's true, they prohibit it. But I'm not sure they prevent it. Like Detroit and Highland Park, our law enforcement may have other priorities than violations of code. It's one of the last places in America where you can grow your grass eight inches high and leave election signs up all year long. If I'm right, there are still a few signs up for Anam Miah, who was re-elected late last year. I'm surprised they're not viewable on Google Street View yet.

In fact, Hamtramckans take their local politics pretty darn seriously, and so it follows that they should also hold strong opinions about the political candidates. And yet I've only seen a few signs, and not on lawns, probably to avoid them being vandalized. I noticed this one at least a few months ago, toward the beginning of summer:

It has grown and enlarged over the summer, as Hamtramck a way to wear one's politics on one's sleeve as possible. A few months later, I noticed that the lower flat offered a political sign as well: 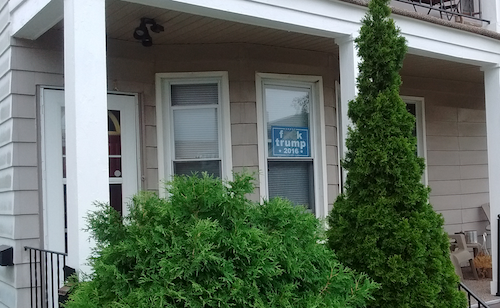 The sign appears to be designed with two bits of duct tape covering part of an obscene word. It's almost certainly displayed in reply to the four signs the upstairs porch sports. It's also displayed from inside the window, where it cannot be tampered with, another consideration that makes me wonder if that's what's behind this lack of lawn display.

In fact, if I were to try to judge who was the most popular candidate from the signs adorning my neighborhood's lawns, I'd say the smart money is on 1-800-HANSONS. 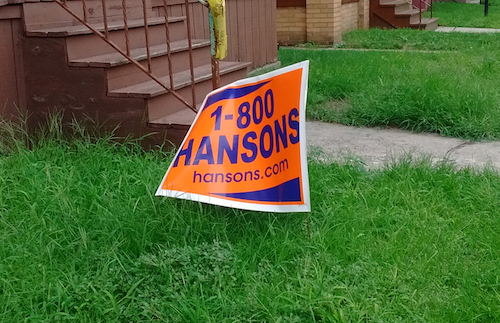 Maybe it's nothing. Maybe I'm just looking too hard at what somebody once called "the absence of evidence." After all, I'm so far outside the beltway — roughly 400 miles outside it — how can I find meaningful insights about presidential politics in a few square blocks?

Well, it might matter that our two front-runners appear to be some of the most despised candidates on the statistical record. That's been noted since March, when CBS and the New York Times found that when you take voters who view one of these candidates favorably and subtract those who view them unfavorably, you get the most negative numbers ever, at least since the poll began in 1984.

Call me cynical, but it suggests to me that, like many other institutions of American life, we've finally perfected "voting for the lesser evil" so much that voters don't even dare express favorable views on either candidate — at least unless their signs are secured far away from unfavorably opinionated passers-by.

Again, maybe it's nothing. Perhaps on Oct. 9, signs will sprout on a thousand Hamtramck lawns, restoring my faith in our electorate. But maybe what I'm talking about are signs of the times — or at least a lack of them.