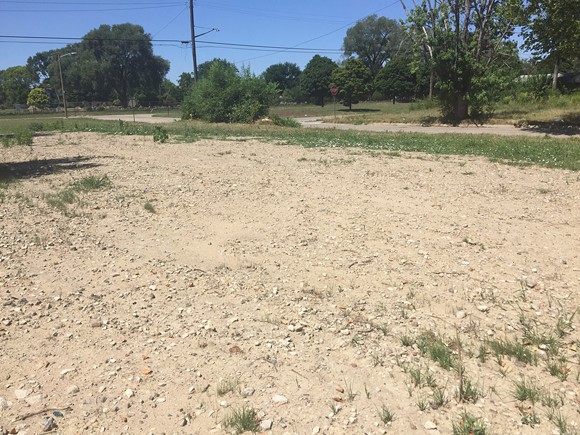 On the most recent episode of The Americans with Charlie LeDuff, the intrepid (sometimes annoying, but increasingly endearing) journalist goes all in on his favorite topics as of late: The Detroit Land Bank and the pseudo-public-organization's increasingly pricey but not necessarily effective demolition process.

As LeDuff has previously pointed out, since Mayor Mike Duggan came into office in 2014, the cost of demolitions have increased significantly. Under former Mayor Dave Bing, for example, it cost on average about $10,000 to demolish a house. Under Duggan, the price has gone as high as $20,000 in some cases. These high costs — coupled with allegations of unfair bidding practices — have resulted in an FBI probe into the land bank's demolition process;* however, that was not the topic of yesterday's episode.

Rather, LeDuff dug into the very issue Duggan has previously cited as one of the main reasons for the rising costs: Top soil.

In October — following LeDuff's first announcement that Duggan's demolition numbers just "don't add up" — the mayor and LeDuff sat down on Fox's Let It Rip to talk it out. There, Duggan was questioned point blank: What's up with the rising costs? After trying to pin the jump in costs on an increase in demolition numbers (anchor and attorney Charlie Langton shut that down, using a "buying in bulk" metaphor to ask why more houses being torn down would mean a rise in price), Duggan eventually settled on a more difficult-to-dispute answer: new environmental standards and fill dirt (read: top soil).

With so many houses coming down, Duggan said, there's not enough dirt to fill the demolition sites, and so a lot of the cost increases center around trucks having to drive 30 to 40 miles to get dirt.

So this brings us to yesterday's The Americans episode. While the top soil argument is sort of hard to shred — national averages for dirt fill costs are not exactly common — LeDuff seems to have found a way. He simply made the shrewd observation that it just wasn't happening.

Visiting numerous demo-sites (including 14097 Marlowe, where Duggan valiantly stood in July, watching the 10,000th structure demolished since he took office), LeDuff points to something troubling but also difficult to deny: top soil just isn't there. Despite it costing $23,930 to demolish the noncommercial home — according to LeDuff and the city's demolition tracker — top soil is notably absent.

While this raises questions about the use of funds, it also highlights dire repercussions for the future. By skimping on top soil, demolition companies are leaving behind vacant lots that resemble lunar landscapes — and just like the moon, we believe it would be pretty difficult to cultivate said land.


According to LeDuff, under Bing, city ordinance said the entire demolition hole (an estimated 8 feet) had to be filled with dirt — or as Le Duff puts it, "nice dirt." However, in 2014, under Keyvn Orr this ordinance was changed: any dirt (aka concrete-filled dry dirt) could fill the hole as long as the top 3 feet was fresh top soil. 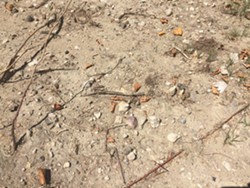 "That was supposed to save us a lot of money," LeDuff says in a voiceover, "but somehow it didn't and Mike blames the dirt. But how Mike, when you're using less dirt?"

As LeDuff suggests, it's unclear if the 3-foot rule was ever fully followed under Duggan. One thing is for sure there have been many attempts to do away with it.

According to LeDuff, the mayor's top attorney, Melvin Hollowell, asked City Council in June to nix Orr's 3-foot law and instead change the minimum to a measly 6 inches of clean soil. More so, Hollowell requested that the law be retroactive to "avoid any unintended consequences."

While the video (see above) is fascinating to watch, one of the most interesting parts is the fact that nobody from the mayor's office or the Detroit Land Bank seems particularly willing to really sit down and talk with LeDuff.

Detroit Land Bank Director of Public Affairs Craig Fahle told MT Thursday that LeDuff's story was "filled with deliberate inaccuracies and nonsense." The Land Bank is demanding a retraction from Fox 2, Fahle said, and expects "the outcome to be the same as the last time, an on-air apology."

"Every completed demolition is inspected by the city's Building Safety Engineering and Environmental Department for quality of fill and adherence to city guidelines," Fahle said. "Contractors do not receive final payment until the final grade is approved. In many cases, contractors are required to go back and correct mistakes before they receive final approval and payment."

Fahle said LeDuff's statement that the contractor who performed the 10,000th demolition was paid $23,930 is "false."

"The company has not yet requested final grade clearance from the city and will not be paid until passing the inspection."

When we pointed out to Fahle that the city's own demolition tracker says the demolition price for the 10,000th house was $23,930, Fahle responded: "that's just the bid price. All contracts are competitively bid."

How often contractors are paid less than their initial bid price is somewhat unknown. It's also somewhat hard to understand via the city's own tracker what are bid prices and actual prices — a fact that makes all data on the average cost of a demolition somewhat obscured.

MT has also reached out to a spokesman for Duggan for comment.

We're not exactly surprised that LeDuff had trouble getting answers from the Detroit Land Bank.

Following LeDuff's most recent episode, we received the below email chain from a reader, Iain Maitland, who messaged the Land Bank in August — and then again this morning — about the lack of topsoil at a location where a property was demolished in May. (You can see the two emails below)

Maitland has yet to hear back from the Land Bank.

The Land Bank, which oversees the demolition of blighted buildings and auctioning of abandoned and foreclosed homes, was created in 2008; however, it wasn't until Duggan took office in 2014 that its influence in the city surged.

That year, the organization, which is in charge of deciding which buildings to demolish, received an influx in federal dollars from the the "Hardest Hit" fund. While the money was originally earmarked to help families hit by the economic and housing crisis, a portion of the $498.6 million grant was re-appropriated to the Detroit Land Bank for demolitions. Prior to the grant, the city was razing between 1,000 to 2,000 buildings a year. After gaining access to the funds, demolitions nearly doubled in the city, with 3,500 buildings razed in 2014.

In May, the Detroit News reported: "Since January 2014, more than 8,600 houses have come down in Detroit under the Duggan administration’s demolition program. The vast majority of the city’s demolitions — more than 6,000 — have been paid for with federal Hardest Hit Fund dollars." In July, Duggan and the Land Bank celebrated the demolition of the 10,000th property since he's been in office.

Below (and in the pics above) you can see what the Gable Street property looked like on August 8 when Maitland sent his original email.

*When we've previously said the FBI was conducting a probe into the city's demolition practices, we've been told by the mayor's PR folks that this is inaccurate. "The probe is into the Detroit Land Bank, which is not the city," they say. This seems sort of like potato-pah-ta-toe, considering how closely the two work together, not to mention it's the city's mayor who's front and center when the demolition news is glowing (aka the 10,000th tear down).