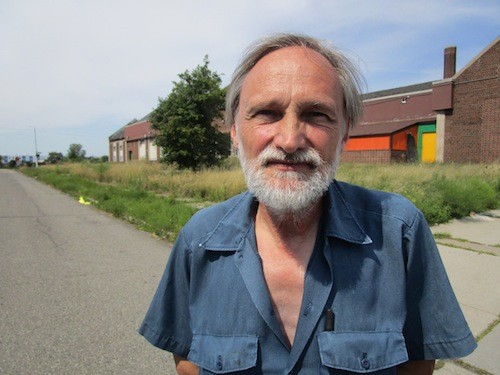 Bob Rose, 65, is nursing a paper cup of coffee on Meade Avenue in Detroit. He’s a faithful MT reader, one who often calls to share his views on what we publish. Lately, he’s sounded a bit more down than usual about life in general and Detroit in particular, which brings me here to meet him outside his old high school to try to find out why.

Rose is a retired city worker whose wife died about 12 years ago. These days, aside from a gig volunteering for the Michigan Anti-Cruelty Society, he has plenty of free time. He spends a fair amount of it driving around the city, looking for what remains of the Detroit he remembers so vividly of his childhood.

It sounds a lot like what my dad did before he died, traveling around and snapping photos of the places he’d worked and lived. In fact, Rose, who has had “two and a half” heart attacks in the last decade, makes jokes about his death with disconcerting regularity.

As a longtime Detroiter, I guess Rose has reasons enough to feel glum. For instance, today, we’re here to chat and look at what remains of the hulk at 13000 Dequindre St. Officially, the school is called Detroit Transition East. It’s an 86,000-square-foot building built to last forever in 1900. It was closed in 2010 and has been more or less empty since then.

Beginning at least in the 1930s, it became the George Washington Trade School, and its students included James Lee Boggs. Rose went there in the late 1960s. He even shows us his old ID book as proof.

He says a lot of good people came out of there, but that it wasn’t really there for good students.

“It was actually the bad boys’ school for the guys,” Rose tells me. “If you didn’t fit in in junior high and didn’t like school because you felt it didn’t teach you anything, they’d send you here.”

That said, “I had some of the best time of my life in there,” he says. “If you wanted to, you could learn. Every day that I came in, I learned something. The instructors all seemed to care about the students. I enjoyed coming here. That’s why I still stop here whenever I can. Even on the weekends, if I just feel like going out and taking a ride I come back here. I sit around, I watch, I memorize. Sometimes I don’t feel good because of what’s happened, but I think I got better good memories than bad.”

He points out where Mr. Ortiz’s drafting classes were, where Mr. Strasky’s machine shop was, in the old gym, with the backboards still up on the walls. But our eyes are drawn instead to a duo of scrappers pulling plywood and planks from the school this morning, depositing the wood into the bed of a rented pickup truck.

“They’re probably just picking up the plywood and taking it somewhere else,” he says. “They rent the U-Hauls and they scrap or salvage for the day. I used to get mad about it. … But it’s going to get torn down anyway. They know it and so does everybody else.”

Not everybody is blasé about the scrappers. One neighbor is mad enough to yell his complaints at us, as he sees us watching the scrappers at work. He hollers from his porch: “It happens every damn day. They out here every day. I call the police and nothing happens!”

Indeed, the two scrappers work lazily, stealing the boards that keep out the elements, and finding a lot of good lumber as well. After a half-hour, the bed of the truck is full, and they drive off to sell their ill-gotten booty.

You can see why the scene could pack an emotional wallop for Rose. Not only did he attend the school, he also worked in the building, helping run the boiler room for a few years.

“The way these schools were built, having worked in them, you go by the Albert Kahn mindset: If you’re going to build something, build it to last, especially with public money and for public use. There’s nothing wrong with these buildings that, had they been taken care of, they’d still be standing. If they stood as long as they did into the 1960s, when I came here, as long as you keep something up that’s well-built, it’ll last. Now you build something you’re lucky to get 30 years out of.”

He shakes his head, mourning “a perfectly good building that went to hell along with all the good that came out of here.”

“This school put a lot of good people out into the world, which is what I thought education was all about, before education became an industry," Rose says. "But, just like the neighborhood around it, it slowly fell to where it wouldn’t be used anymore. As you see now, it’s just slowly being picked apart. Pretty soon it’ll come down like all the other old schools in Detroit that have been left to rot.”

Of course, the story of the city’s decline is easily explained. After World War II, thanks to government policies that helped disperse factories, build freeways, and insure mortgages, to say nothing of the G.I. Bill offered to mostly white veterans, the city began emptying out in the 1940s. Detroiters left their neighborhoods, moved less than 10 miles, and went on to lead a cheerful life guaranteed by government subsidies.

So why didn’t Rose leave?

First of all, he says he doesn’t feel he fits in in the suburbs. He says he gets it bad enough from black city cops who view him suspiciously, often the only white guy in his east side neighborhood, let alone from white suburban cops who register shock that he still keeps house there. He says his sister is moving to Port Huron and he’s still considering heading up there with her, but you get the feeling that for all his frustrations Rose simply can’t let the city go. What sort of hold does it have on him?

Well, as an immigrant from Germany, Detroit gave him something to blend into, someplace to fit in, an entirely new identity, and even a new name (his given name "Uwe" was replaced by "Bob," a kindness done him by a savvy schoolteacher). Earning a native’s right to navigate the bustling postwar city wasn’t easy.

“I came here as an immigrant to Detroit as a kid in the 1950s,” he says. “Man, this was America. This was what an American city was supposed to be. Just like in old movies later on: It was a city! I still to this day don’t believe that this all happened. That should have stayed like that forever. The feeling like you belong, you fit in, you work. Especially for an immigrant like me, you want to fit in.”

Now he looks at the stories of that city as they fade away, piece by piece, into unforgiving, unsentimental disarray. But he still stays at least a short drive away from what remains, and wishes he could know what happened to all the people he once knew.

“After World War II, as the neighborhoods broke up, that sense of community went with them, when everybody started going on the other side of Eight Mile Road,” Rose says. “But I can’t go. I still know a few of the families whose descendants live in this neighborhood. You drive down their street and it’s quite a sight: A nice house, a house half-burned, a house falling in, a little bit of everything. Each one is a story in itself.”

Rose wishes he could preserve those stories, or that people thought they were worth preserving. It causes him anguish to see people throwing their history away. After all, he drives all over just to find the precious few bits of history he has left.

“Detroit, I’m sorry to say, has seen its better day," he says. "Like this neighborhood, you still see houses here, you see nice ones, bad ones, ones that have burned up and fallen in on themselves and everything. That’s Detroit. And to know that this was a solid neighborhood at one time, that’s the purpose of this school being here, and all the things that the school was to a lot of people and how long it held on, and the good people that came out of it: That’s what hurts.”

“At one point,” he says, “I could come in the morning and start the whole school up, and shut it down at night.”

It reminds us of that joke about the last person leaving Detroit turning off the lights, but we choose not to mention that one.

But if you had to find a person to shut off that last light in our city, I bet you could do worse than Bob Rose.