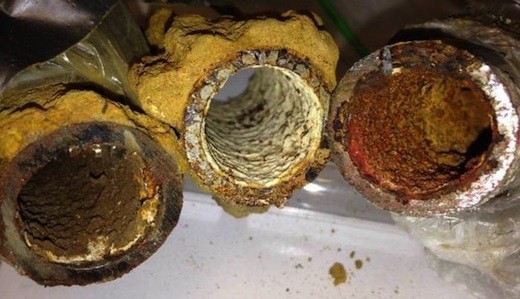 One year ago, on Sept. 15, 2015, a press conference was held on the lawn in front of Flint City Hall. Gathered before a small throng of reporters were members of Flint’s Coalition for Clean Water, scientists Marc Edwards and Siddhartha Roy of Virginia Tech and the ACLU of Michigan.

Edwards and Roy were there to announce the results of a citizen-led study that had found lead levels in Flint’s water that were nearly double what the city and the state estimated.

Members of the Coalition for Clean water – which included the Flint Democracy Defense League, Concerned Pastors for Social Action, Water You fighting For?, CAUTION, Concerned Citizens and others – turned out in force to issue a number of demands, including a return to Detroit’s water system and the replacement of lead service lines.

Meanwhile,the ACLU of Michigan announced the results of our own investigation –which found that the city and state could claim that Flint’s water met federal standards because the tests used to back those claims had been rigged in multiple ways to guarantee the results would skew low. As a result of these findings, we called for an independent outside investigation into way those tests were conducted.

National media weren’t paying much heed that day. And those in power in Michigan had made their best efforts to keep the story from ever getting out.

But the tragic tale of the Flint water crisis – wherein a cost-saving switch to the corrosive Flint River as the city’s municipal water source led to the leaching of lead into the water supply for nearly two years – eventually broke through and drew international attention. Because of the determined efforts of those standing in front of City Hall one year ago, the truth would not stay buried.

Now, as we look back on the one-year anniversary of that gathering of media and activists, we’ve heard a lot of rhetoric and seen a lot of posturing in the months since – but the truth about what’s happened in Flint has emerged slowly, painstakingly and at the same glacial pace that change has arrived to Flint.

Two months after that September 2015 press conference – and, after a string of adamant assurances from Gov. Rick Snyder’s administration that Flint’s water was safe – the governor finally conceded to the fact that river water untreated with corrosion control chemicals was causing the crisis. With the terrible reality of the crisis finally exposed, Gov. Snyder was forced to allow the city to return to the Detroit system.

Replacement of service lines has begun.

And numerous investigations have been launched.

Snyder’s own task force laid much of the blame for the crisis on the state’s emergency manager law, which placed control of Flint entirely in the hands of a state appointee. That same task force also castigated the Michigan Department of Environmental Quality for expending its energy attacking the credibility of people proved to be telling the truth rather than doing its job of protecting the health and well-being of Flint’s residents.

The U.S. Justice Department, the criminal investigation unit of the U.S. Environmental Protection Agency, the Michigan Attorney General and the Genesee County Prosecutor’s Office are all looking into what happened in Flint. So far eight state and one city employee have been charged with felonies, the result of an alleged conspiracy to cover up the the fact that Flint’s 100,000 residents were needlessly exposed to a potent neurotoxin for 18 months and then falsely assured that the water was safe.

More charges are likely to be filed.

Numerous class-action lawsuits have also been launched. For instance, the ACLU of Michigan, along with the Natural Resources Defense Council, has filed a lawsuit calling for the courts to intervene in order to ensure that the people of Flint are provided clean, safe water.

On the day of the press conference, the ACLU of Michigan captured on-camera interviews with two of the key players in the crisis: Director of Public Works Howard Croft, who resigned soon afterward, and Utilities Director Mike Glasgow, who has pleaded no contest to charges brought against him and is now cooperating with law enforcement as the investigations continue.

Those interviews can be seen in “Thirst for Truth,” a short documentary about the Flint water crisis the ACLU of Michigan released last year.

Much has happened since that landmark gathering in front of Flint City Hall one year ago. The overarching problem, however, has not gone away: Flint’s water still remains out of compliance with federal safe drinking water standards. Despite returning to a regional system that draws water from Lake Huron, lead continues to be detected at unacceptable levels, forcing residents to either use bottled water or filters.

The full truth about what happened in Flint is still finding its way to the light. The damage to infrastructure caused by using river water for 18 months was massive, with an equally massive amount of work to correct the problem still remaining.

But slow as they may be to get to Flint, at least truth and change are emerging.
Justice, however, has yet to be served.

Curt Guyette is an investigative reporter for the ACLU of Michigan.