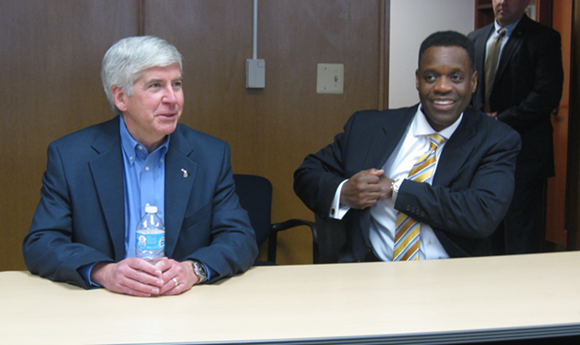 The Sixth Circuit Court of Appeals rejected a challenge from Detroit pensioners to cuts established for their pension under the city’s bankruptcy reorganization plan.

We’d written before about this challenge. At the time, the office chatter was that the people supporting emergency management as a concept were going to push full steam ahead in hopes that the legal challenges to the law and the actions taken under it would be moot.

It’s a trick called “stake driving,” and it was turned into a fine art by Robert Moses, the famous parkway- and freeway-builder.

He was wont to say: “Once you sink that first stake, they’ll never make you pull it up.” Despite long court battles, and even when rulings declared some of his appropriations illegal, Moses realized that if he could somehow start a project, money and legal authority would always be found to finish it rather than leave it half-done. (That’s for Wayne County jails, right?)

The opinion is available now, and it seems to rely upon a similar gambit: So much now rests on the basis that the actions undertaken were legal, that even if they were illegal too much has been done to reverse the legal basis now.

See, our state government, and our Detroit leaders know they don’t have to obey the law. All they have to do is claim that the crisis in Detroit means democracy has to be suspended, and then they can do all sorts of illegal things that would land you or me in jail. And so instead of owing pensioners money, those pensioners have to live on tins of cat food after being promised pensions. And even though it probably wasn’t legal, going back and undoing their actions would simply be too chaotic. And so our leaders get to write their own narrative about saving the city, and the people get to dig in trash bins for dinner. Everybody wins.

At least one voice on the court felt otherwise, expressing the now quaint view that an injustice done to the people who work for a living is an injustice at all.

The dissenting opinion wrote, “In its zeal to avoid the merits of this case, the Majority extends an already questionable prudential doctrine to a context in which it has no place. This is not only a derogation of our ‘virtually unflagging obligation’ to decide cases within our jurisdiction, … but it has real-world consequences for the litigants before us — retirees who spent their lives serving the people of Detroit through boom and bust, and who feel that the City’s bankruptcy was resolved through a game of musical chairs in which they were left without a seat.”