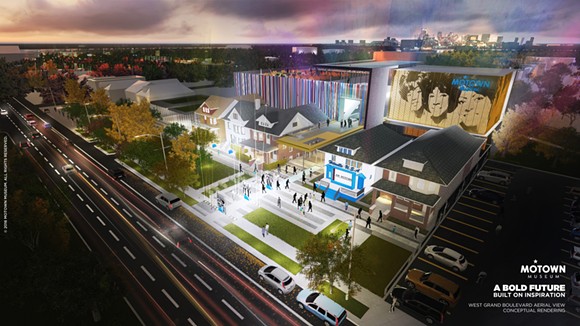 The project, which would increase the museum's footprint to 50,000 square feet, has a planned completion date of 2018.

The goal is to "narrate and celebrate on a much larger scale what the Motown legacy is recognized for: unmatched creative genius that transcends every barrier imaginable by bringing people together from all walks of life to share in that unmistakable Motown Sound," Motown Museum CEO and Chairwoman Robin R. Terry says in a statement.

The expansion will be funded through a forthcoming capital campaign, according to the museum.


In addition to soundtracking the childhoods of metro Detroiters, Berry Gordy’s storied label helped establish the careers of Marvin Gaye, Stevie Wonder, Smokey Robinson & The Miracles, Diana Ross & The Supremes, Martha & The Vandellas, The Four Tops, The Temptations, and Michael Jackson, all of whom are members of Rolling Stone’s “100 Greatest Artists” list.

The label moved to Los Angeles in 1972, and the Motown Museum opened in 1985 at the "Hitsville U.S.A." house on West Grand Boulevard.

"It brings me real joy, and I am proud and humbled to know that the inclusive legacy of Motown, and the most talented people who are so near and dear to my heart, will have their stories told in this new museum," Gordy says in a statement.

The lead designer for the initial museum expansion plans is Phil Freelon, who helmed the design of the Smithsonian National Museum of African American History and Culture. Detroit-based Hamilton Anderson Associates is the architect of record for the project.