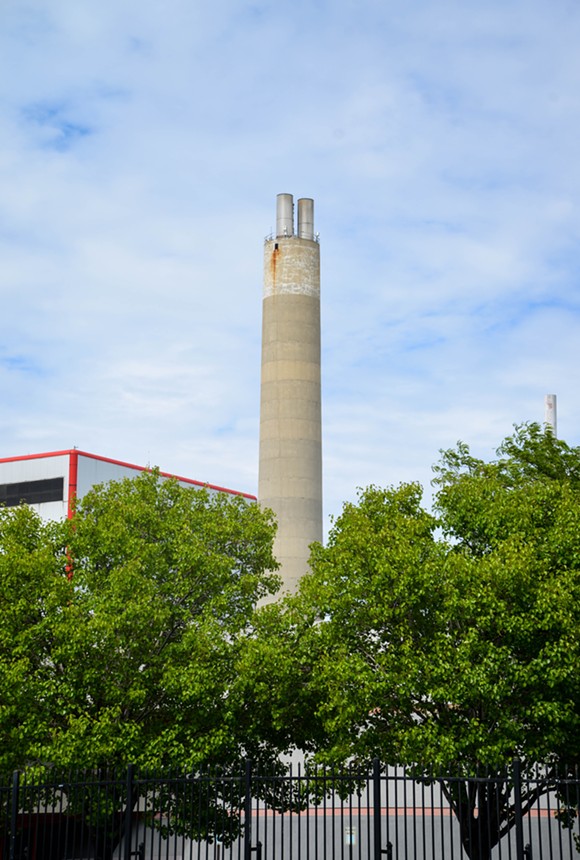 The Great Lakes Environmental Law Center is threatening to sue the state, the EPA, and Detroit Renewable Power in response to more than 40 violations of the Clean Air Act at the Detroit incinerator.

The incinerator, located near I-75 and I-94, has committed 21 violations since 2015 for strong odors and 19 violations for carbon monoxide, sulfur dioxide, and particulate matter emissions above allowable limits, according to the Great Lakes Environmental Law Center.

At the same time, 66 percent of the garbage burned at the incinerator originates in Oakland County, according to the law firm — but it’s Detroit residents who must breathe the byproducts.

The neighborhoods surrounding the incinerator have hospitalization rates for asthma that are 2.5 times the state average, as we’ve previously reported. Eighty-seven percent of the 7,280 residents within a 1-mile radius of the incinerator are people of color, according to EPA statistics cited by the law firm.


“Over the past two years, the incinerator has been having a lot of trouble with stack test emissions,” says Nick Leonard, an attorney at the Great Lakes Environmental Law Center.

Emissions violations have not been the primary issue at the incinerator in the past, Leonard says: “That’s a huge problem. Particulate matter has been convincingly tied by several scientific studies to exacerbating asthma.”


In a statement issued through a spokesman, incinerator owner Detroit Renewable Power says the notice from the environmental law firm “merely repeats allegations that have already been made.”


The company “places the highest priority on complying with the strict and complex requirements established by the [EPA] and the MDEQ,” the statement says.


“To that end, we have invested approximately $6 million in just the last few years to improve odor management at the facility. In short, we have done our part. Any claim to the contrary would simply be false.”


The incinerator was opened by the city in the 1980s and sold into private hands in 1991.


The notice of an intent to file a Clean Air Act lawsuit gives the Michigan Department of Environmental Protection Agency 60 days to start an enforcement action against Detroit Renewable Power, the owner of the incinerator, before a citizen suit seeking enforcement of air quality rules can be filed, according to the Great Lakes Environmental Law Center.


In 2015, MT reported that a settlement was reached between the state and the operators of the incinerator. Terms of the settlement included a re-engineering of the facility by the end of this year with a new air ducting system; a $5,000 per day fine for any future violations of Michigan’s air pollution laws; and a $350,000 fine to resolve past odor violations.


An email sent to a MDEQ spokesman requesting comment was not returned.


Leonard says the emissions violations at the incinerator — coupled with the fact that the majority of the garbage hauled there comes from the suburbs, as well as other Midwestern states and Canada — makes the facility an environmental justice issue.