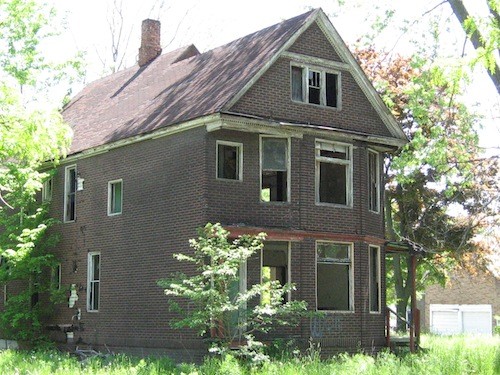 There's an old narrative in metro Detroit, and it goes like this: Everything in Detroit was hunky-dory until one awful week in 1967. That's when black people burned the city down, and all the white people had to flee for their lives. Ever since Detroit has been a cesspool of crime and blight. Only at last is Detroit being rescued, thanks in part to tough policing and an ambitious demolition program.

It's a tidy little narrative. It's also full of half-truths, outright lies, and dangerous fabrications.

In truth, Detroit's problems likely date back much earlier, to the 1908 state constitution that enshrined "home rule" and hindered Detroit's power to annex fringe development. Or to the rise of car culture, which allowed people to live away from fixed-route transit that ended at the city line by the 1940s. Or later, to the one-two punch of the G.I. Bill and the Federal Aid Highway Act of 1956, which helped direct new growth to the suburbs, and started emptying the city out of residents of means as soon as the war was over.

In fact, there's a whole new body of research that delves into the more serious issues to come up with a narrative that shows where Detroit's bullet wounds really are. It has been pioneered by historians such as Thomas Sugrue, author of The Origins of the Urban Crisis: Race and Inequality in Postwar Detroit, and enlarged upon by historians like Beth Tompkins Bates, author of Black Detroit in the Age of Henry Ford.

So it's always exciting to see researchers take the "conventional wisdom" about Detroit and turn it on its head. (Of course, they're actually taking upended history and turning it right-side-up.) And when we discover two different pieces doing that work in the same week, it's thrilling.

First up is a piece by veteran Detroit journalist Bill McGraw for Bridge Magazine. We might have missed it, had it not been run by the Detroit Free Press last week. The story concerned author Heather Ann Thompson, whose recent book on the Attica prison uprising we noted last month.

Thompson is also what McGraw rightly calls "a nationally respected expert on mass incarceration," which is another way of saying that Thompson's credibility on carceral issues is impeccable.

While Thompson agrees that many factors contributed to Detroit's ills: "the disappearance of high-paying industrial jobs, white flight, discrimination in housing and employment, and government decisions that favored suburban development."

But Thompson would add to that "aggressive policing in black neighborhoods" and "laws that vastly increased prison sentences." As Michigan's prison populations swelled, countless families in Detroit were left without a parent, orphaning children, depriving families of breadwinners and caregivers, and driving households deeper into poverty.

When the War on Crime is criticized for targeting black families, it's usually about sentencing provisions that unfairly affect people of color. But thanks to discussions prompted by Michelle Alexander's 2012 book, The New Jim Crow: Mass Incarceration in the Age of Colorblindness, we are beginning to see the War on Drugs declared in the 1970s as a way to deny black Americans what was won during the civil rights movement of the 1960s. Thompson is clearly interested in developing that conversation further. In her interview with McGraw, she says:

And that process I call the "criminalization of urban space" is because what it literally meant was that things that had not been illegal before become illegal, things that had been illegal before but had very slight penalties start to have much higher and higher penalties, and have much longer time in jail. And pretty soon, cities like Detroit — and Detroit is a mostly black city — but black neighborhoods in other cities, become these sites of intense criminalization, intensive policing that turn creates it own social crisis.


If that piques your interest, there's plenty more at the Free Press, and in the original Bridge article.

Of course, sociology is a complex science, and we expect to see perceptions challenged there. Surely, real estate, which deals in hard numbers, is a more rigorous science. And when research shows that an abandoned house will cause the value of neighboring homes to sag, any program that demolishes those houses must be a win for the neighborhood, right?

Well, this is where we introduce a bit of research that was published earlier this year that suggests that, in the absence of plans to replace structures with something, demolition programs accomplish mainly one thing: They leave a neighborhood with fewer houses.

As the paper's author, University of Toronto's Jason Hackworth, points out, "Demolition-only urban policy leads to economic and social isolation," while it has not led "to market rebound or a decrease in social marginality."

Demolition without an affirmative plan to build something on-site was once a source of great controversy. During the urban renewal period in American history, many mayors (including Detroit’s at the time) became deeply unpopular for eviscerating neighborhoods with only the promise of new development to follow. The current wave of demolition in Detroit and beyond does not even make that promise.


His findings include that "the neighborhoods where demolitions have been most active are more economically and socially isolated than they were in 1970 (the baseline year of the study)." Ultimately, he concludes:

In my view, demolition-only is not the progressive effort to rebuild struggling cities it is being billed as. It represents a collapse of policy imagination, public resources, and serious concern for the underlying causes of blight. Whatever the intent of its proponents, the past 40 years have seen extensive house demolition in the region, and it has not spontaneously generated revival — it has just removed a large number of houses. Absent some other serious, affirmative intervention — probably delivered by the state — demolition-only urban policy has not, and will likely never, regenerate neighborhoods. It will simply replace vacant houses with vacant lots, and further isolate remaining residents.


It's obviously not music to the ears of local officials who are trumpeting from the rooftops their demolition "accomplishments."