Panel will draft policy recommendations on drone use in Michigan 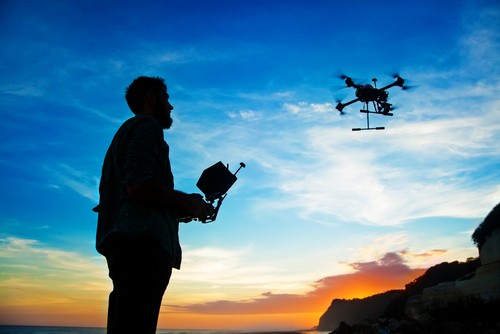 Everywhere you look, drones seem to be having a hard time of it.

No, not the drones that the U.S. military flies through the air in the Middle East, using high explosives to blow up "terror suspects" whose lives the president has signed off on. Those are A-OK, and we can expect to see plenty more of them in the future.

No, we're talking about the radio-controlled devices, often outfitted with cameras, that the consumer can now send high into the sky to give a bird's-eye view of things that used to require a satellite — or at least an expensive crane — to see. Hobbyists are posting thrilling videos online with breathtaking footage showing us perspectives we simply have never viewed before.

But if you're part of the federal government, drones are a nuisance. That's right, the government — the same institution that reads your emails, listens in on your telephone calls, and records what websites you're accessing — is so uncomfortable with you having a drone it recently issued more than 600 pages of rules on what your drone can do and what it can't.

And from New York City to Salt Lake City, states and localities are getting on the bandwagon as well, announcing no-fly zones, outlining registration programs, and generally being repressive killjoys about this exciting new technology. We've written before about how drone enthusiasts feel they're being misunderstood and unfairly targeted.

Now, don't get us wrong: There are some reasonable objections to drones just flying anywhere. A 50-pound drone flying directly over a runway is obviously a problem. As are "peeping tom" drones peeking through your window, whether they're operated by a nosy neighbor or Uncle Sam.

But the rush to regulate consumer drones smacks of the authorities trying to protect the one thing they care most about: their asses.

That's what many suspect is driving Michigan's drone bill, passed by the state Senate last week.

It outlines some sensible rules, such as prohibiting harassment or violation of court orders via flying camera, but then it creates what it calls the "unmanned aircraft systems task force," a panel of 22 members empowered with drafting policy recommendations for drone use in Michigan.

Some of the members strike us as sensible, such as three representatives of the "unmanned aircraft systems" industry. But then it stacks the panel with 19 more members. Some of them seem neutral enough, including MDOT and DNR officials, public utilities experts from both peninsulas, a member of the Mackinac Bridge Authority, two MDOT officials, a DNR person, people representing an oddly wide gamut of businesses: agriculture, retail, manufacturing, insurance, real estate brokerages, surveying companies, freight railroads, broadcasting, etc.

But note well, there will be representatives of entities who generally don't like being watched, recorded, or surveilled at all. Representatives from local law enforcement, state police, county sheriffs, and the department of corrections will sit on the panel — and you can bet your bippie they'd like some hard and fast rules keeping drones from recording some of their less-shining moments.

In fact, it's right up front in the legislation itself: "An individual shall not knowingly and intentionally operate an unmanned aircraft system in a manner that interferes with the official duties of any of the following: (a) A police officer. (b) A firefighter. (c) A paramedic. (d) Search and rescue personnel." Now, we don't advocate interfering with a crime scene, but ... how narrowly will this be worded? For the journalist, "not interfering" usually means staying behind the yellow tape at a crime scene. We'll wager that law enforcement agencies would not object if those rules were written and interpreted somewhat more broadly.

Interestingly, there will also be a member at the table who represents companies operating "key facilities," such as oil refineries, tank farms, and toxic waste facilities. We're willing to gamble that they, too, wouldn't invite drones to peer in on what they're up to behind those fences topped with concertina wire.

So, Michigan drone operators: Get ready. With very little public debate, we're about to entrust a committee of the powers that be, who are warier than ever about transparency or being recorded, to come up with reasonable rules for how citizens may use drones, if at all.

Gee. We wonder how that's going to go.