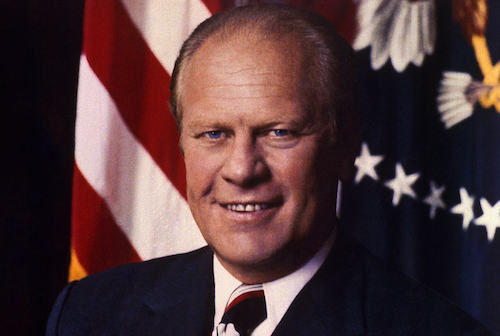 Just a little reminder this morning that, 40 years ago, President Gerald R. Ford offered the greater metropolitan area of Detroit a rapid transit system, or at least the money to fund much of it.

Don't believe us? See the original New York Times article itself. What's more, it wasn't like the RTA proposal in this month's election. It was touted initially as "a rallying point for urban revitalization." In other words, it was intended to help create the framework for more development in the city, as opposed to upholding the status quo and simply shuttling unemployed city residents to car-centric exurban bazaars daily. You can see it in the strings attached to that gift in its earliest moments: "that Detroit's business community pledge to invest an equal amount in development along the proposed routes of the transit system."

Then, as today, Detroit's business community loves accepting gifts, but hates being told what to do — even when it makes perfect sense and when somebody is throwing a fortune in federal money at them.

The story of that $600 million — which translates into $2.5 billion in 2015 dollars — was included in Ryan Felton's 2014 story for Metro Times, "How Detroit ended up with the worst public transit."

In that story, Keith Schneider, former director of the Michigan Land Use Institute, called the inability to capitalize on the federal pledge, which eventually expired, “arguably the most damaging decision to the Detroit region in the last 50 years."