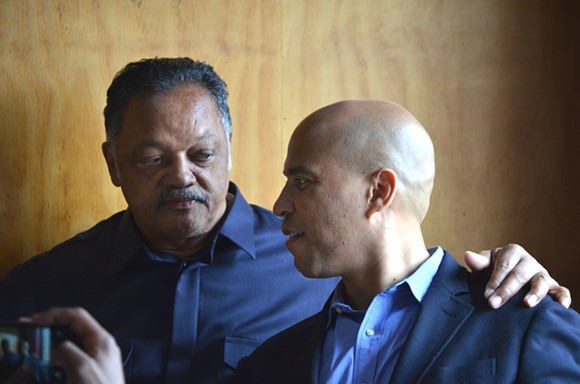 The FBI’s involvement in the presidential election is “patently unacceptable” and based on “nothing but speculation,” says U.S. Sen. Cory Booker, who visited Kuzzo’s Chicken & Waffles in Detroit with the Rev. Jesse Jackson on Thursday.

Booker, who's in Michigan campaigning for Democratic presidential nominee Hillary Clinton in the final days before the election, says FBI Director James Comey has “thrown a wrench into the American political process.”


Clinton is scheduled to appear at a get-out-the-vote rally in Eastern Market on Friday.


Jackson says the contest between Clinton and GOP nominee Donald Trump has parallels to the 1964 presidential race between Barry Goldwater and Lyndon Johnson. The Rainbow PUSH Coalition founder has mounted two presidential campaigns himself, in 1984 and 1988.


Goldwater “represented segregation,” while Johnson opposed it, Jackson says. “It was that kind of fight in ‘64.”


The 75-year-old civil rights icon says his No. 1 concern heading into Tuesday’s election is voter suppression.


“The fact you don’t have early voting [in Michigan] is a form of suppression,” Jackson says.


Jackson stayed and ate at Kuzzo’s, which is located on Livernois Avenue in the Avenue of Fashion district. 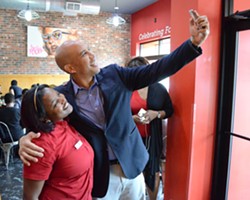 Booker stopped at tables in restaurant, chatting and taking selfies with customers, as well as with Jackson.


Shantell Beckton, a manager at Kuzzo’s, says customers were shocked when the senator and activist stopped by: “It’s inspiring.”


Booker served two terms as mayor of Newark, NJ before being elected to the Senate. Cities such as Newark and Detroit that are struggling with crime and poverty should be viewed as “cities of opportunity,” not “problems,” he says.

“We need to start seeing cities as what they are in America: domestic emerging markets.”