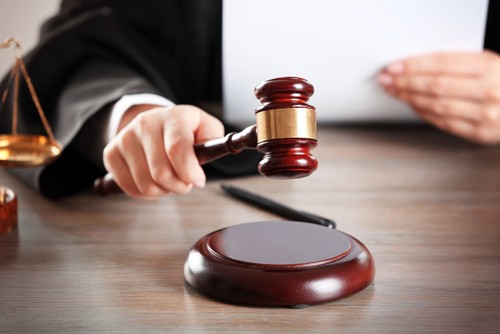 For more than two years, unfiltered tap water in Flint has been unsafe due to elevated lead levels. Today, residents of that city face a bit of relief, thanks to a federal court ruling yesterday.

Federal judge David M. Lawson ordered the state of Michigan and the city of Flint to ensure that every Flint household has safe drinking water. That means homes must receive bottled water deliver unless the government verifies, on a regular basis, that the home has a properly installed and maintained faucet filter, or the home declines delivery.

The judge's ruling said, “In modern society, when we turn on a faucet, we expect safe drinking water to flow out. … The relief is intended to provide a rough substitute for the essential service that municipal water systems must furnish: delivery of safe drinking water at the point of use.”

"The Court today affirmed that all people have the right the safe drinking water, including the people of Flint, Michigan," said Dimple Chaudhary, senior attorney with National Resources Defense Council. "The court correctly recognized that the government created this crisis, and it’s the government’s responsibility to ensure that all people in Flint have access to safe drinking water."

Michael J. Steinberg, legal director of the American Civil Liberties of Michigan, said, “It is an important, but rare, victory for the people of Flint, who have suffered one set back after the next since poison started flowing out their faucets more than two years ago.”

One can only hope that Lansing procures the court-ordered water with more care than the state did late last year. Last month, an excellent investigation by the Detroit Free Press discovered that Lansing “likely paid hundreds of thousands of dollars too much for emergency supplies related to the Flint drinking water crisis because it used no formal bidding process, relied almost exclusively on one out-of-state company with ties to a top aide to Gov. Rick Snyder, and didn't turn to Michigan companies already approved to do business with the state.”

The investigation found that, two days before Gov. Snyder acknowledged the Flint water crisis, Richard Baird, a top Snyder aide, had contacted Home Depot board member J. Frank Brown, saying, “We have a situation in Flint, Mich. that is beginning to get national attention and could be an opportunity for Home Depot.”

The revelations in Paul Egan’s exposé were so shocking they prompted Senate Minority Leader Jim Ananich last month to ask Michigan Auditor General Doug Ringler for an investigation into the spending.

Needless to say, with media watching closely, it would be wise of Lansing to avoid using this court order as a payday for politically connected cronies.

But it would also be a smart move to avoid using Ice Mountain water, Poland Spring water, or any brand associated with Nestlé. As those following aquifer rights issues know, Michigan’s Department of Environmental Quality — the same agency that pooh-poohed Flint’s water concerns until it became impossible to do so, and then saw senior staff either resign or face prosecution over that — very quietly asked for public comment on Nestle’s plan to pump twice as much water out of the ground. The proposal would allow Nestle to double the more than 300,000 gallons per day it pumps out of the ground in Osceola County, for a $200 application fee. You read that right: Under the plan, Nestle would be allowed to pump about 100 million gallons more per year for the cost of $200.

This while, 140 miles away, poor residents are asked to pay high rates for water unfit for human consumption.

Doesn't sound like a winning proposal, does it? That could be why MDEQ “alerted the public” to a comment period in an obscure biweekly permitting calendar, and only extended the comment period until Dec. 3 when the department was blasted by groundwater protection advocates.

Another little detail that might have the appearance of a conflict of interest: Gov. Rick Snyder's former chief of staff is married to Nestlé’s spokesperson.

Making things just that much more unsavory, Nestlé's former CEO once called the idea that “as a human being you should have a right to water” “extreme.”

So here's hoping state officials stay away from those Nestlé brands. It just wouldn't seem proper, would it?