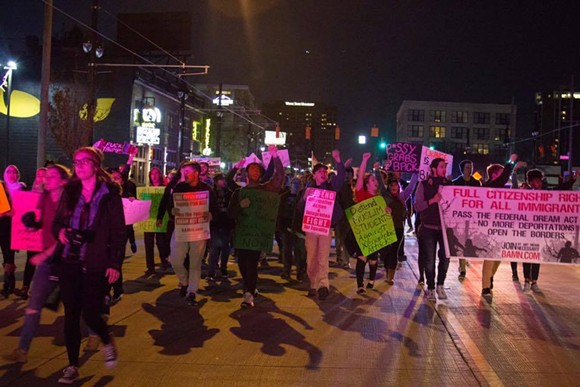 If you're of a mind to protest Donald Trump's electoral win this week, we've got all the details below about today's peaceful protest to be held at Wayne State University's undergraduate library, from 5 p.m.-8 p.m., at 5515 Gullen Mall, Detroit.

It's called the WSU Rally & March To Shut Down Trump's Racist Vision For America, and the Facebook page for it is here. Please be safe and stay informed about your rights.

RALLY & MARCH TO SHUT DOWN TRUMP’S RACIST VISION FOR AMERICA!

Join BAMN. We will not accept the coming to power of a fascist movement in America. No Trump Tyranny!

Donald Trump has used the presidential election in the United States to build a movement modeled on the semi-fascist ultra-right wing immigrant bashing parties of Europe, like the Le Pen National Front, and the historical experience of the rise to power of Mussolini’s fascists and Hitler’s Nazi’s. With Donald Trump’s assumption of the presidency, the first step would be taken in the creation of a fascist power over the American government and the American people. The feeble electoral tactics of Clinton’s Democrats have failed to prevent this disaster for democracy in the U.S. and around the world. Both the Democratic Party and the American news media have proven bankrupt in defeating Trump or even in speaking the plain truth about the threat he presents and the real character of the movement he heads.

Trump and his movement can be defeated, but only by a new mass movement committed to the principles of democracy, equality, diversity, and openness. Only such a movement can defeat Trump, his billionaire club backers, and his mass lynch-mob followers’ struggle to undermine those principles in order to carry out draconian attacks on immigrants, organized labor, and all oppressed communities. Trump’s movement is at war with the new majority-minority America with its progressive commitment to diversity, tolerance, and internationalism. Trump’s demagogy and even his personal image promises a return to a reactionary utopia of white-skin privilege and male power over women.

To defend the democratic gains of the past, and realize the potential for a fully human liberation in the future, and to avoid the destruction of both Americans’ most cherished principles and a world of increasing division, hate, and violence, we must build a new mass movement to defeat Trump and everything he stands for. The building of such a mass democratic movement is the greatest and most urgent challenge of our times. Our new mass movement, by mobilizing everything that’s best in us, can defeat Trump and his ugly mob, which concentrates everything that is worst in American history. Now is the time to build the movement to defeat Trump through mass political education, struggle, and direct action. Join BAMN now in building this movement. We cannot let Trump win.

Coalition to Defend Affirmative Action, Integration, and Immigrant Rights and Fight for Equality By Any Means Necessary (BAMN). www.bamn.com