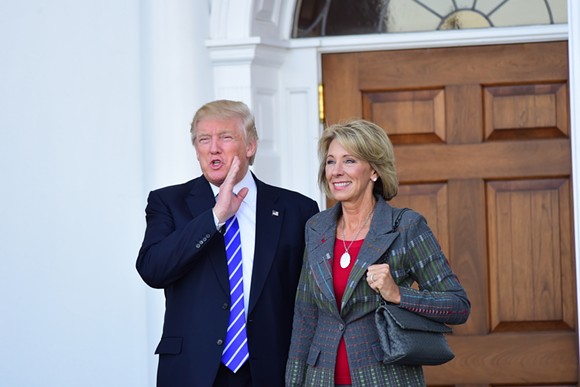 With Wednesday's announcement that President-elect Donald Trump has appointed GOP donor Betsy DeVos as his education secretary, it looks like there will finally be a DeVos in the White House.

Writing of her husband, Dick DeVos, who unsuccessfully ran for Michigan governor in 2006, Metro Times' Curt Guyette deduced that the Amway Corp. heir must have had the presidency in his sights, and it appears the couple have bought their way into one. Through their Dick and Betsy DeVos Foundation, the clan has given millions to GOP campaigns and conservative causes over the years, and is one of the largest contributors to the Michigan Republican Party.

In 1993, they successfully pushed for Michigan's law that allowed for charter schools, privately run entities that can receive state funds as an alternative to public schools. In 2000, they unsuccessfully ran an effort to amend the state constitution to allow vouchers, or public dollars going to private schools. The next year, she established the Great Lakes Education Project, an anti-union group that this year pushed successfully to dismantle legislation that would regulate the proliferation of failed charter schools in Detroit, which compete with the city's struggling public schools.

The problem is that DeVos's policies are so obviously not working here in Michigan — at least for students.

A yearlong investigation by the Detroit Free Press was blunt in its assessment of Michigan's charters, which have lax state oversight: "Wasteful spending and double-dipping. Board members, school founders and employees steering lucrative deals to themselves or insiders. Schools allowed to operate for years despite poor academic records. No state standards for who operates charter schools or how to oversee them." The report also noted Michigan has a record number of charter schools run by opaque, for-profit companies.

It appears, then, that a DeVos pick is the opposite of Trump's claims to "drain the swamp" of politics.

“Donald Trump's pick of Betsy DeVos for Secretary of Education proves that having a shortage of experience means nothing as long you don't have a shortage of money," Progress Michigan executive director Lonnie Scott said in a statement released shortly after the news of Trump's pick broke. "The DeVos family has been using their deep pockets to influence the Michigan legislature for years and it looks like they have finally bought their way into a presidential administration as well."